A Daughter of No Nation: Alyx Dellamonica 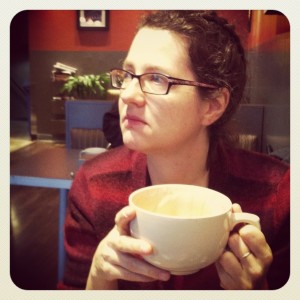 Photo by Kelly Robson, who is also excellent

I love Canadians. I would collect more of them but I always run into problems with Customs. One of my new Canadian faves is the very talented Alyx Dellamonica, author of the Most Excellent Hidden Sea Tales trilogy from Tor (a well as the duopoly Indigo Springs and Blue Magic), inventor of Stormwrack, creative writing teacher, Clarion West Borg Alum, and general delightful person. Today she talks about choosing cool books, balancing her teaching and writing lives, and inviting Miles Vorkosigan to dinner. Her latest book is Daughter of No Nation, and you need it.

1. First of all, what do new readers need to know about Alyx Dellamonica?

I am prolific! An absolute busy bee! And so there’s a lot of my writing to be had, in a number of styles and genres. My publisher, Tor, has sample chapters of all of my novels up on their website, along with a bunch of stories that are prequels to my current trilogy. But there’s also my baby werewolf has two mommies story, “The Cage, a time-travel horror piece called “The Color of Paradox,” and a story, “Wild Things,” about magical contamination in the Greater Vancouver Regional District. Or, if military SF with squid aliens is more your thing, I have Proxy War stories up at Strange Horizons and Lightspeed. You’d rather have an alternate history of Joan of Arc? I’ve got that too!

2. When did you first start writing and can you remember the first thing you finished? 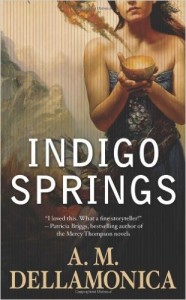 I was writing Dr. Seuss-inspired doggerel as soon as I could actually put words on a page: I made books of poetry by stapling illustrated pages of badly scrawled manuscript together as a six year old. My first novel–or so I thought–was completed when I was in fourth grade… I was inspired by a Canadian novelist named Gordon Korman, who at thirteen published a book called This Canât Be Happening at MacDonald Hall! I finished my first real novel at some point during university and then wrote something like three more trunk books, even as I was selling my first short stories. Then Tor bought my debut novel, Indigo Springs.

3. How do you balance the life of teaching with your own creativity?

The primary challenge I face as an instructor is less with writing than with reading. I see so much beginner fiction that I occasionally have a subconscious response whereby I don’t want to read anything anymore. Partly it’s because I’m tired, and I read all day… but it’s also because most beginner fiction isn’t all that good, or fun to read, even when it shows promise. I have learned to work my way back into fiction reading after a stretch of heavy marking by rereading my favorite novels. This has a benefit, which is that when you set aside time to reread, you come to understand–on a deeper level–just why your favorite novels work and what the authors did to make them so terrific.

My other strategies for this are to keep an eye out for cool books to blurb–my editors are great at picking things I’ll love–and to review forÂ Tor.com. I am also broadening my reading of short fiction. 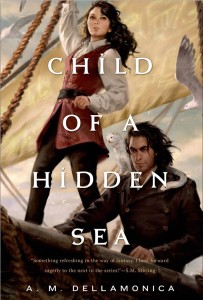 4. Where did the original idea for Child of a Hidden Sea come from?

Indigo Springs is a novel I’m really proud of, not least because it’s feminist and it has a lot of queer characters, plus it won the Sunburst Award for Canadian Literature of the Fantastic. It’s a bit of a sad novel, though, and the sequel, Blue Magic, has a massive body count as the magical/environmental disaster at its heart spreads across the world. After those books were done, I vowed to write something fun.

Having decided that, I made a long list of everything I think is fun, which included hopelessly nerdy topics like “Biodiversity!” and “The History of Fingerprinting!” and more obvious candy, like “Pirates!” and “Boys with albatross wings!” And then, rather than picking and choosing, I decided to see how many of the items on that list, which filled two pages, I could shoehorn into one book, or perhaps three.

5. When did Sophie Hansa start talking to you?

I created a sporty and outdoors-oriented protagonist who overshares her every thought–I lean to the overly tactful–and then gave her a profession I know a fair amount about, which was nature photography. We all of us give way to periodic fantasies, after all, about the people we would be if we were, let’s be face it, completely different human beings. Every now and then, we tell ourselves: “In another world, if I wasn’t asthmatic and afraid of heights, I would totally be a firefighter!” So I imagined an athletic, emotionally expressive serial camper who thinks nothing of rappelling off cliffs to get a shot of baby birds hatching, or of cave diving for the sheer exploratory thrill of it even though the real me’s feelings on that subject are “OMG, do you have any clue how dangerous that is? And also cold?”

Since Sophie’s primary motivation in any situation tends to be curiosity, all I had to do to get her talking was to present her with a puzzle. Look, Sophie, you’ve fallen into another world. What world? How do you know it’s different? Why don’t I recognize that species of shark? And…. we’re off! 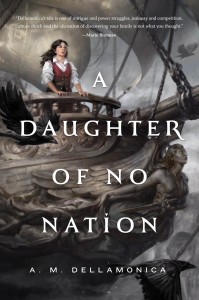 As a kid I read a lot of Ray Bradbury and Stephen King, and a fair bit of Andre Norton and Harlan Ellison. There was no censorship at home, so if Jaws was in the house, I read Peter Benchley. If Shakespeare was in the house, I read Shakespeare. (Playboy was in the house, so I read that too. They used to publish quite interesting fiction; I don’t know if they still do.) When I got to grade school, I found our library had the Foundation books and the Heinlein juveniles. A poet named Monty Reid gave me Walk to the Walls of the World by Suzy McKee Charnas, when I was sixteen. I also read–and still read–a lot of mysteries. As a first grader it was the series books, like Nancy Drew, the Hardy Boys, Tom Swift… even in a pinch the Bobbsey Twins would do. Finally, I had a series of history books that my mother had passed down, which were the biographies of famous U.S. women. A lot of these were the stories of women who rose to the blinding personal height of growing up to be a First Lady, but in the mix were Sacagawea, Julia Howe, Jane Adams, Â Louisa May Alcott, Clara Barton, Harriet Beecher Stowe, and a number of other suffragettes and U.S. women of letters.

I’d like to meet Nancy Drew. I’d have to meet Frank Mackie from Tana French’s Dublin Murder Squad novels. We’d need Miles Vorkosigan, just to ensure that, y’know, shit happened. Thursday Next, I think. And to round everything out, I’d like to add Kivrin from Connie Willis’s Oxford time travel novels. In which case, can we please invite Connie, too? 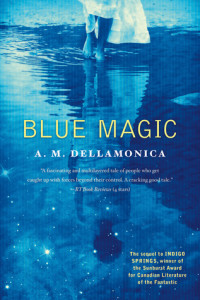 I’m not sure there’s any one book. I used to get Writer’s Digest every month as a teen and–because I was just starting out–there was always something in it that seemed new-to-me and exciting and untried. If I’d started to slow down on churning out what we’d now call my juvenalia, that monthly sense of the writing world, out there waiting for me, would get me started again. This was before the Internet, and so was really valuable.

The fiction writers who had the strongest effect on me as a beginning author were Madeline L’Engle, Bradbury, King and especially Peter Straub. I went to Clarion West in 1995 with a list of Straub-y prose tricks I wanted to learn.

9. What can you tell us about Daughter of No Nation?

A Daughter of No Nation is the middle book in the Hidden Sea Tales trilogy. I describe these books as *Narnia for Environmentalists,* because in them Sophie Hansa discovers a world where the magic you can work in your home nation is entirely dependent on your microclimate: you write spells using the species available to you.

Sophie isn’t especially welcome on this other world, which is called Stormwrack, but she’s trying to figure out its relationship to Earth, and she’s deeply interested in this guy, Garland Parrish, who is the captain of the sailing vessel Nightjar. This would be easier to deal with if her little sister, Verena, didn’t have a raging crush on Parrish.Â  Sophie’s also trying to figure out why everyone thinks she should stay well away from her birth father, Â who is essentially a duelling Supreme Court justice from one of the wealthiest nations in the world. Because, really, what better way is there to improve the concept of Supreme Court Justice than to give them the power to settle out of court disputes with a big wood-chipper of a sword?

10. Whatâs next for Alyx Dellamonica? 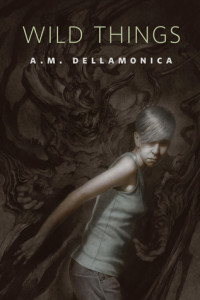 I’m busy figuring out what my next book will be like, and writing short stories in the meantime. One will be out soon at BENEATH CEASELESS SKIES: It takes place on Stormwrack, and is called “The Boy Who Would Not Be Enchanted.”