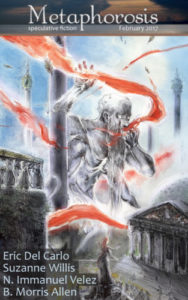 Yes!Â  This is an event!

Darling Suze Willis (one of my Clarion South 2009 classmates) has a glorious new story out, “A Nightingale’s Map of the City”, with all her trademark beautiful prose.

The white stone buildings of the city gleam like scattered pearls, their peaks and towers reaching for the vertiginous blue of the sky. Atop the spires and turrets and minarets, domes and curlicues of gold-leaf sparkle, making the city seem dusted with slow-burning embers. The ghost of the giant Gustav, the cityâs architect and creator, walks cobbled alleyways that are carpeted in moss, skimming past the tiny ferns growing from arched doorways. It is the city he built for his flame-haired Julietta. His place of torment since the day she left.

Everywhere â everywhere â are monuments to Julietta. Ivy-covered statues, beaten copper friezes, emerald-roofed cenotaphs carved with elegiac verses. As though all of them together might be woven into a spell under the splinter-moon to bring her back again. Julietta left the city long ago, much longer than Gustav cares to remember. So he holds the city close like a well-worn photograph, folded and re-folded and disintegrating with time. Without it, heâs scared that he wouldnât remember her face, her voice, the touch of her skin.

This entry was posted in fairy tales, News and tagged A Nightingale's Map of the City, fairy tales, Metaphorosis, suzanne j willis. Bookmark the permalink.