Aliette de Bodard and The Dominion of the Fallen 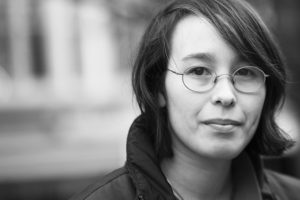 Aliette de Bodard lives and works in Paris, where she has a day job as a System Engineer. She studied Computer Science and Applied Mathematics, but moonlights as a writer of speculative fiction. She is the author of the critically acclaimed Obsidian and Blood trilogy of Aztec noir fantasies, as well as numerous short stories, which garnered her two Nebula Awards, a Locus Award and a British Science Fiction Association Award. Works include The House of Shattered Wings (Roc/Gollancz, 2015 British Science Fiction Association Award), a novel set in a turn-of-the-century Paris devastated by a magical war, Â and its upcoming sequel The House of Binding ThornsÂ (April 2017, Roc/Gollancz). She also publishedÂ The Citadel of Weeping Pearls (Asimovâs Oct/Nov 2015), a novella set in the same universe as her Vietnamese space opera On a Red Station, Drifting. She lives in Paris with her family, in a flat with more computers than warm bodies, and a set of Lovecraftian tentacled plants intent on taking over the place.

1. First of all, what do new readers need to know about Aliette de Bodard?

I’m a writer of fantasy and science fiction–both long and short fiction–with a couple awards under my belt (two Nebulas, a Locus Award and three British Science Fiction Association Awards). I’m the author of the Xuya series, a space opera series of short fiction inspired by Vietnamese culture and featuring a Confucian galactic empire, of the Dominion of the Fallen series (The House of Shattered Wings/The House of Binding Thorns, out from Roc/Gollancz), dark fantasies set in a post-magical-apocalypse, turn-of-the-century Paris, and of the Aztec noir fantasy novels Obsidian and Blood (reissued as ebooks by the JABberwocky agency).

2. What inspired your new novel The House of Shattered Wings? 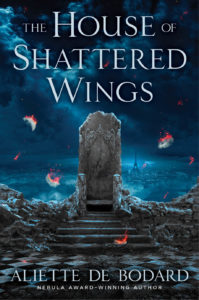 A deep-seated desire to destroy Paris? *grin* I originally started writing House of Shattered Wings as a urban fantasy set in 21st-Century Paris, focused on families of magicians – except I could never make it gel, and the magic system didn’t feel meaty enough to me. So, when I took it back to the drawing board, I changed the setting to have Paris in ruins, and a society based on the Belle Epoque (which is entirely based on my deep abiding love for 19th Century novels, and period anime like Full Metal Alchemist and Black Butler). And I also changed the magic system, so that you had magical beings (Fallen angels, Vietnamese immortals) who were themselves a source of magic–and people who could take magic from them, either by asking nicely, or by force (it got dark, let’s just say. Very dark *grin*). 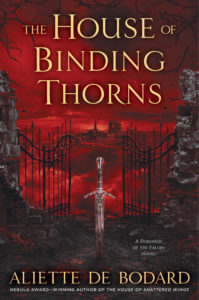 3. What can you tell us about the sequel The House of Binding Thorns?

The House of Binding Thorns is a standalone book set in the same universe as The House of Shattered Wings: it benefits from having read the previous book as it has returning characters, but you can dive right in and still enjoy it! The House of Shattered Wings was focused on House Silverspires, the oldest and most powerful House in Paris; The House of Binding Thorns is focused on rival House Hawthorn and on its interactions with the Dragon Kingdom. It’s (hopefully) a book with a slightly different focus: not as claustrophobic as The House of Shattered Wings, and with more locations in the Houseless areas, and a slightly larger cast that draws from all walks of life in Paris. And it’s also got diplomatic wrangling between magical factions, bloody murders, kissing, and stabbing (not necessarily in that order!). It will be published April 2017 by Ace in the US and Gollancz in the rest of the world.

4. How does this new series differ from your first books, the Obsidian and Blood trilogy?

It’s a very different mood I would say, though there are a bunch of common elements. Like Obsidian and Blood, Dominion of the Fallen is very much a fantasy of a city (I don’t use “urban fantasy” because the term has come to mean something else): it’s set within Paris and within a relatively small setting. It’s also got some of the same dark/horror elements that existed in Obsidian and Blood, and some focus (but less) on a mystery. And there the similarities end, I’m afraid.Â Dominion of the Fallen leans more towards the epic fantasy end of the spectrum: the canvas is very much larger, and focused on several main characters (instead of just one in Obsidian and Blood). It’s focused on the question of survival–of its price, and the morality of it–and is very much a cross between Game of Thrones, Vampire: The Masquerade, and 19th Century books like Count of Monte Cristo.

5. Your gorgeous novella On a Red Station, Drifting is set in your Xuya universe ? are any novel-length works likely?Â 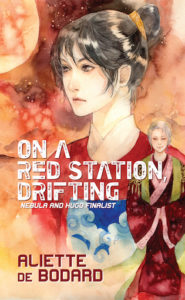 Possibly! One of the things I really want to work on is a fix-up novel composed of several short stories/novellas, focusing on several generations of the same family, over several years/decades/centuries. But I’m perpetually putting back because it’s large and scary!

6. What inspired the Xuya universe?

A lot of things. Partly it was my wanting to write an alternate history timeline where China and other Confucian countries would be dominant: I started writing noir stories set in that universe because the plots were easy to come up with, and I could focus on getting the changed features of the world across. Then I moved to the space age; and this is going to sound odd, but one of the largest inspirations there was Star Wars III – which I saw twice in the theatre due to my then-boyfriend being absent at the time of its release. By the second time we got to the birth of Luke and Leia, I was feeling rather sarcastic about a universe that had all those wonderfully modern spaceships and cool weapons, and seemingly couldn’t be bothered to solve maternal mortality problems – a very screwed-up set of priorities insofar as I was concerned. In the future I was planning, I assumed childbirth would be routinely well-attended and well-survived (as, indeed, it mostly is today in a lot of countries), but I also wanted to focus the first stories on births, and to have some sort of jeopardy associated with birth. Human childbirth wasn’t realistic (for the reasons above), so I thought, “hang on, maybe if they gave birth to AIs”? And that was pretty much the start of the Xuya space age and the ongoing series. 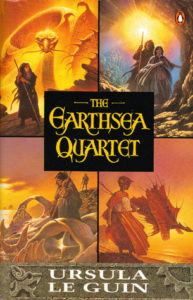 Er, rather a lot of them! David Gemmell – I found him while I was (briefly) living in the UK in my teens, read Wallander and The King Beyond the Gate, and was hooked. I love the way he portrays both heroes and villains as flawed human beings struggling against their natures to do the right (or wrong) thing. Ursula Le Guin – not only was The Earthsea Quartet a read that stuck with me, but her Steering the Craft contained some of the best writing I’ve ever received, focusing on plot that wasn’t necessarily defined by conflict, and on the nuts and bolts of writing sentences and point of view in an open-minded fashion. Dorothy Dunnett – I read Game of Kings, the first book in her historical Chronicles of Lymond, when I was 17 or 18, and still reread the entire series every few years. Her depiction of history is masterful, blending different languages, different points of view and a host of different countries from the Ottoman Empire to Scotland. And it’s got one of the most affecting romances I’ve ever read (and a rape scene that is actually treated like the traumatising event it is, rather than for titillation). Terry Pratchett, without whom I probably wouldn’t be reading quite so much in English (I taught myself so I could read the books that hadn’t been translated in French yet). And, of course, Vietnamese myths/fairytales and folktales from my family, and the vast canvas of history, which always helps for inspiration!

Uh. Sayers’ Lord Peter Wimsey and Harriet Vane, who would make wonderful conversation. Tenaka Khan from David Gemmell’s King Beyond the Gate. Susan Sto-Helit from Terry Pratchett’s Discworld, though I suspect she’d make me feel nervous halfway through the proceedings. Prudence Gentleman from Zen Cho’s Sorcerer to the Crown, because I suspect she’s one of the few people who could successfully entertain Susan!

9. Which book, either fictional or otherwise, would you say taught you the most about writing?

10. Whatâs next for Aliette de Bodard? 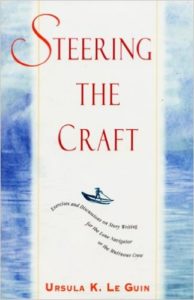 I have a few projects on the backburner: I finished a novella set between The House of Shattered Wings and The House of Binding Thorns, featuring Emmanuelle, the archivist of House Silverspires, and am desultorily working on a genderbent retelling of Count of Monte Cristo set in my Xuya universe. I have a couple commissioned short stories, and I just turned in a retelling of Tam and Cam for Ellen Oh’s, Elsie Chapman’s and Martha Mihalick’s anthology of Asian fairy tales retellings LEGENDRY.