And Then interviews: Jack Dann 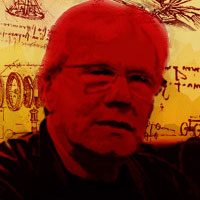 What inspired “The Talking Sword”?

Well, the excellent author, editor, publisher, and pal Paul Collins asked me for a YA story for his anthology Fantastic Worlds, whichÂ was also bought by Bruce Coville for his Shapeshifters series. Commissions usually wake me from my sleep of procrastination. Anyway, I thought it would be fun, so I started noodling with ideas; and, somehow, I kept hearing the voice of my pal Harlan Ellison. (That happens sometimes <Grin>.) And then I had the idea of the hero’s journey done as Jewish schtick and … well there was this sword and it just starting talking. So if you wanted to be an Arthurian hero and earn your, er, spurs; and if you were given such a miraculous sword … what can I say, but “Oye Vey!” Well, actually, I did say a little more than that in the story.

It’s a difficult form of fiction to write. It’s compression, creating a universe in a shot-glass; but, whoo-boy, when it’s done right, it kicks. Read Salinger’s “A Perfect Day For Bananafish” and tell me you didn’t take a quick intake of breath after reading that last sentence.

Everyone says they love short fiction, but it’s always been a tough sell. (That spoken by an inveterate anthologist.) But it’s a delicious form, and I would suggest it will live on and retain a small but discerning audience.

Just about finished my PhD. (Telling people I’m a ‘mature-age student’ usually elicits a belly-laugh, but it’s nice to be able to ask: “Which is the best discount: student or senior?” And thanks to the good offices of the University of Queensland, I have a novel finished which will be sent to my agent in New York next week. (And, eventually, there will be a nonfiction book on counterfactual fiction.) A collection of my holocaust stories entitled Concentration is forthcoming: in her introduction to the volume, critic and scholar Marleen Barr writes: âDann is a Faulkner and a MÃ¡rquez for Jews. His fantastic retellings of the horror stories Nazis made real are more truth than fantasy.â (I do like the Faulkner/Marquez bit <Grin>.)Â Also forthcoming is a showcase anthology entitled Dreaming in the Dark, which will launch the new imprint PS Australia, of which I’m the publishing director. And I’ve got a terrific story in the anthology by a terrific writer named … Angela. A collection of poetry entitled Poems From a White Heart is also in the cooker.

Jack Dann is a multiple-award winning author who has written or edited over seventy-five books, including the international bestseller The Memory Cathedral, which was 1 on The Age Bestseller list, and The Silent, which Library Journal chose as one of their âHot Picksâ and wrote: âThis is narrative storytelling at its bestâ¦ Most emphatically recommended.â Locus called his novel The Rebel: an Imagined Life of James Dean âa significant and very gripping novelâ¦alternate history with passion and difference.â A companion volume of stories entitled Promised Land has been published. This collection, as well as The Rebel, The Silent, and The Man Who Melted are also available as audio books. His other short story collections include Timetipping, Visitations, The Fiction Factory, and Jubilee, which has recently been published in ebook format. Satalyte Publishers have just released a new âunexpurgatedâ edition of The Rebel entitled The Rebel: Second Chance.

Other publications include: the short novel The Economy of Light; the autobiography Insinuations; and a special edition reprint of Dannâs 1981 novel Junction. He is the co-editor, with Janeen Webb, of Dreaming Down-Under, which won the World Fantasy Award, and his anthology Ghosts by Gaslight, co-edited with Nick Gevers, won the Shirley Jackson Award and the Aurealis Award. His Magic Tales anthology series, edited with Gardner Dozois, is now available ebook format. A collection of Jackâs holocaust stories entitled Concentration is forthcoming. In her introduction to the volume, critic and scholar Marleen Barr writes: âDann is a Faulkner and a MÃ¡rquez for Jews. His fantastic retellings of the horror stories Nazis made real are more truth than fantasy.â

Also forthcoming is a showcase anthology entitled Dreaming in the Dark, which will launch the new imprint PS Australia, of which Dann is the publishing director; a collection of poetry entitled Poems From a White Heart, and a new novel (which is still under wraps).

This entry was posted in News and tagged ant then, ghosts by gaslight, jack dann, ps publishing, Salinger, The Memory Cathedral, The Rebel, The Silent. Bookmark the permalink.