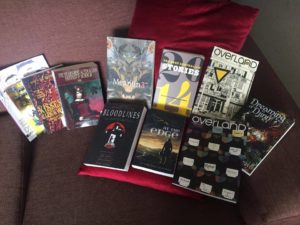 Continuing the series of At the Edge posts, Perthite Anthony Panegyres talks about “Crossing”.

Since 2011, Perth short story writer and PhD candidate at UWA, Anthony Panegyres, has had numerous stories published in anthologies and also Australiaâs premier literary journals (Meanjin and twice in Overland).Â  He has also been an Aurealis Award Finalist for Best Fantasy Short Story (republished in The Best Australian Fantasy & Horror, 2011).Â  His most recent stories have been published in the anthologies: The Best Australian Stories 2014 (ed. Amanda Lohrey) and Bloodlines (ed. Amanda Pillar).

Iâm a writer who enjoys a technical challenge and “Crossing” was quite an experimental story. I think itâs the first story Iâve written in first person present, which naturally leads to a strong voice. I was inspired by Will Self at the time Â­â an author who takes satire to whole new levels. I found that I had to really peel back what Iâd written as the initial voice was so biting it risked alienating most readers.

Another technical aspect was incorporating a gentle twist into the middle, rather than the more traditional (and sometimes âdatedâ) twist at the end. I wanted to see if I could hold the reader when Janeâs world is flipped at the half-way point of the story. I have Michael Swanwickâs clever story “The Bordello in Faerie” to thank for that in a structural sense â although the subversion is by no means as sharp as Swanwickâs.Â  I think readers of both stories may not pick up on the influence but itâs there.

In terms of ideas, anachronisms have always interested me. Iâll spoil the story if I give too much of the world of Adeville away but itâs a world where anachronisms abound – Â and itâs also a story where the past and present collide.

“Crossing” explores past and present relationships, which I consider a nostalgic (and a challenging) part of life for most people to deal with. We donât always simply âmove onââ most of us take the past (or at least a part of it) with us.

2. What Appealed to You about the Project

To be honest, I had this story âalmost readyâ when fellow Perth writer, Martin Livings alerted me to the submission opportunity (nice to see both of our stories ended up finding a home in the anthology). When I say almost ready, I mean just that: I had to amp up Janeâs Adevillian relationship so that it could move into the realms of a warmer narrative. I mellowed the satirical side â if the story is challenging now then readers would have been kapowed by the earlier version.

Once involved in the anthology, however, I was grateful. Iâd been in an anthology with Dan Rabarts previously (Dreaming of Djinn, ed. Liz Grzyb) and really admired and enjoyed his own story in it: “Silver, Sharp as Silk”, so I was excited to see what heâd bring to the table this time around as an editor in At the Edge. Both Lee Murray and Dan Rabarts were consummate professionals throughout the process. Their genuine care is intoxicating,which makes working with the duo a delight. I think any publisher in the industry would benefit from their magic.

The Antipodes is an exciting place to be for short story writers. I canât wait to read Joanne Andertonâs story. I loved her work in Bloodlines (ed. Amanda Pillar) and the three stories Iâve read of hers have been great.

Having an inclusive cross-Tasman relationship is special. Donald Drumpf would have built a gigantic sea wall across the Tasman â or raised a few krakenâ¦.

3. What do you love about Short Stories?

Does this give me a chance to rave?I read some of Stephen Donaldsonâs stories as a thirteen year old but outside of that I must have kept myself in the dark regarding the short story genre. The sad reality is that high school students are given flash fiction stories to study, and these donât allow for the depth of character and relationships that the longer short story provides. In essence, students are given a false representation of what a short story is. In actuality, most anthologies require a story of a minimum of three thousand words or so. Thatâs a stark contrast with the few pages students are presented with in high school.Imagine the benefits to the genre in the long run if opportunities are provided to read the lengthier short story form at high school.

I think I fell in love with the genre when I read Jonathan Strahan & Charles N. Brownâs Locus Awards Anthology in my late teens. And during postgrad, I did a wonderful unit a few years ago in the genre short story.We studied writers like Nalo Hopkinson, Chitra Banerjee Divakaruni and Joyce Carol Oates, and writers of that ilk had me hooked on the form and on the search for more. Iâm now an avid reader of the genre. I love the variety and experimentation that comes with the territory. Itâs a venue in which ideas and styles can be explored that may not be achievable or workable at longer lengths.

I made some poor attempts at impersonating JRR Tolkien in primary school. And then made similarly poor attempts from Years 6-8 impersonating writers who, in their own turn, were very close to impersonating Tolkien: the Terry Brooks, Stephen Donaldson, Weis & Hickman mould. Not that these writers or high fantasy as a genre is bad, in fact the opposite, they kept me reading during my young teens.

Fingers crossed, Iâll have a couple of stories in line for next year. One anthology was put on hold. And Iâve a novella/novellette also being held, so Iâm hopeful. I donât think I have anything else left in the trunkâ¦

I have a job that I love but does take up a lot of time and Iâm also in the middle of my PhD candidature. Having said that I am working simultaneously on a novel and another novella. I feel the former is further ahead than the latter. Ideally, if I find the time, Iâll write another story.

Other than that Iâll be reading. Iâm almost at the end of The Inheritance of Loss by Kiran Desai, and Iâm reading That Glimpse of Truth by David Miller (an anthology of 100 short stories), All the Time in the World: New and Selected Storied by E.L Doctorow and The Great Sea: A Human History of the Mediterranean by David Abulafia. My book club has chosen The Natural Way of Things by Charlotte Wood.Â  And after that Iâll be sinking my reading teeth into At the Edge.

This entry was posted in News and tagged All the Time in the World: New and Selected Storied by E.L Doctorow and The Great Sea: A Human History of the Mediterranean by David Abulafia, Anthony Panegyres, At the Edge, Chitra Banerjee Divakaruni, Dan Rabarts, Dreaming of Djinn ed. Liz Grzyb, joyce carol oates, Lee Murray, Meanjin, Michael Swanwick, Nalo Hopkinson, overland, Stephen Donaldson, Terry Brooks, That Glimpse of Truth by David Miller, The Best Australian Stories 2014, The Inheritance of Loss by Kiran Desai, The Natural Way of Things by Charlotte Wood, Tolkien, Weis & Hickman. Bookmark the permalink.