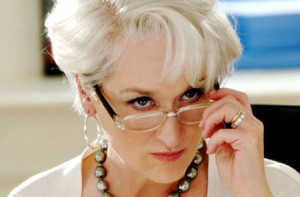 There’s no forgetting the wonderfully surnamed Miranda Priestly as Meryl Streep created her in “The Devil Wears Prada.” The character was said to have been modelled on Anna Wintour – the English editor-in-chief of American Vogue. But that’s beside the point – Streep was nominated for an Oscar, won a Golden Globe and a bucketload of other awards for the part. Remember the way Meryl’s Miranda waved her middle finger at people when, from behind her desk, she’d had enough of their trembling-kneed presence? And the way she said, “That’s all,” ever so softly? And the way she sent people running around the New York block for her morning coffee? And, when a prospective personal assistant made to respond to her observation, “… and you have no style,” Miranda looked at her coolly and said, “No, no. That wasn’t a question.” She never shouted. Nor raised her voice. And through all her no-holds-barred comments she quested for perfection, worked harder than anyone, and was outrageously, fabulously good at what she did. Meryl’s Miranda was magnificent.