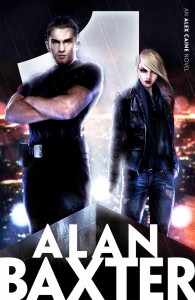 So, my mate Alan Baxter has a book out on 1 July 2014. Bound is an action-packed, kickass, pulpy urban fantasy with martial arts, evil demons (is there any other kind?), a troubled hero, a take-no-crap heroine, and a really really scary grimoire. Yeah, I’ve read, and it’s already getting some terrific reviews.

The blurb? Here it is:

Alex Caine is a martial artist fighting in illegal cage matches. His powerful secret weapon is an unnatural vision that allows him to see his opponentsâ moves before they know their intentions themselves.

An enigmatic Englishman, Patrick Welby, approaches Alex after a fight and reveals, âI know your secret.â Welby shows Alex how to unleash a breathtaking realm of magic and power, drawing him into a mind-bending adventure beyond his control. And control is something Alex values above all else.

A cursed grimoire binds Alex to Uthentia, a chaotic Fey godling, who leads him towards destruction and murder, an urge Alex finds harder and harder to resist. Befriended by Silhouette, a monstrous Kin beauty, Alex sets out to recover the only things that will free him â the shards of the Darak. But that powerful stone also has the potential to unleash a catastrophe which could mean the end of the world as we know it.

Alan took some time out between Continuum and heading off to Supanova in Sydney to answer a few questions about life, the universe and everything – but especially about Bound, the first book in the Alex Caine series.

1. So, tell us about the inspiration for Bound.

It came from two main directions. I wanted to write a book about a character who was a martial artist â a career fighter â and mix that up with the magic, supernatural and thriller mayhem stuff that I like to do. I thought a dark fantasy thriller with a career fighter as the protagonist would be pretty cool. And I also wanted to write something that was essentially the high fantasy quest and heroâs journey idea, but warped to fit a modern, contemporary setting and filled with the horror and dark fantasy elements I love. So when I decided to combine that style of story with the protagonist of Alex Caine, Bound was born.

2. Your interest in writing a martial artist character comes from your own experience, doesnât it?

Very much so! Iâve been a martial artist for over 30 years, and now run an kung fu academy on the south coast of NSW. As much as writing has been my life, so has martial arts â I canât remember, or even imagine, a time when it wasnât. I really wanted to draw on that experience in a protagonist and use the worldview Iâve built up over my life to inform a character who was a fighter to his very core.

3. How long have you been writing and what started you down the track of words? 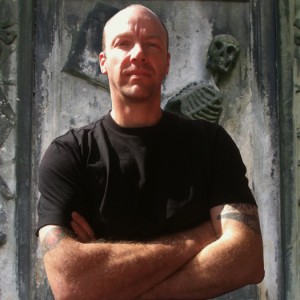 Iâve always told stories. The only subject I liked at school was English. I wrote stories as a kid, wrote D&D (and other RPG) adventures as a teen for my friends, wrote awful poetry, was in a band and wrote songs. I canât remember a time that I wasnât making shit up! In my late 20s I decided to start taking writing really seriously, even though Iâd had several false starts and unfinished novels before then.

4. Who have been your favourite writers over the years?

I could go on and on.

5. Youâve got a great character in Silhouette and youâve gone to a lot of effort to make sure sheâs not a damsel in distress. Tell us a bit more about that.

Thanks! I really did make a big effort there. While Alex Caine is the protagonist of Bound, itâs really Silhouette whoâs the star of the show in many ways. She helps Alex when his life turns to shite and thereâs no chance he would have survived the onset of mayhem in his world without her. It was really important to me that Silhouette not be simply a foil for Alex, or a token, but a character with agency and importance and story of her own. Bound is as much about Silhouette as it is about Alex, really. The other main female character in the book is Sparks, and between them Silhouette and Sparks represent two very different aspects of a similar experience and my playing with those character types was very deliberate. I could talk a lot more about this, but it would definitely be entering spoiler territory. Suffice to say that Silhouette is absolutely kickass and only gets more so throughout the series so far. I hope the series is successful so I get to write more about her. I even have some ideas for Silhouette stories outside the Alex Caine novels â Iâd like to write some Silhouette novellas (or even novels) if the possibility arises. 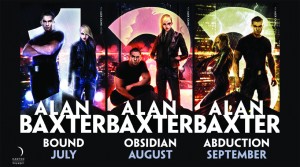 6. In an unusual move, the publishers have chosen not to put the titles on the covers, but rather the number of the book in the series. Discuss.

Yes, bold move on their part! The titles are very big and bold on the spine and the back, but not on the front cover. In early feedback itâs proven quite divisive. My writing style and the general vibe of the books is very visual and action-oriented. I often get told how my graphic novel, movie and videogame influences are very apparent in my novel writing. And Iâm happy about that â I love that style which is why I write it. So Harper Voyager have deliberately designed covers with a view to emulating those things â graphic novels, movies and videogames â alongside the obvious novel that it is. I think the covers are really quite powerful and striking, so I hope other people do too. Obviously, I have very little say on these things, as itâs a publisher decision, but with luck the look will have the desired effect and get people interested. And for those people who really hate the covers, hopefully theyâll look past that and enjoy the stories within, as thatâs what itâs really all about anyway.

7. What have been the highlights of your career so far?

Signing a three book deal with Voyager is top of the heap, for sure. I recently sold a short story to The Magazine of Fantasy & Science Fiction, which is arguably the most prestigious SFF genre magazine out there, so I couldnât be happier about that. Iâve been trying to sell a story to them for about a decade! Otherwise, every time I sell a book or story is a highlight and every time I hear from a reader that they enjoyed my stuff, thatâs a real buzz too. It never gets old.

8. Your ambitions for the future?

I want to keep writing and selling novels and stories. Iâd love to get successful enough that I can write full time and make a good living from what I enjoy doing so much. Not many people can, but itâs still something Iâm always aiming for. In the immediate term, Iâm really hoping the Alex Caine books sell into the UK and US territories. Theyâre very global books, with the action happening all over the world, so they have global appeal. Iâd love to see them get out to the rest of the world, and Iâm confident they will sooner or later. Otherwise my ambition is simply to keep doing what Iâm doing, get better and better at it and get better and better results.

9. Bound is the first in a trilogy. What can readers expect from the Alex Caine Series?

Well, itâs the first in a trilogy so far! Iâm hoping to write many more in the series. Each book is a standalone novel, but there are threads which make a bigger, overarching story. The vast majority of what happens in Bound is expanded in Obsidian and wrapped up in Abduction, but lots of other tantalising things remain for future books, even though each one is standalone in its own right. What can people expect? Magic, mayhem, monsters and martial arts! In book 2, Alex and his friends get drawn to a place thatâs truly the stuff of nightmares and from which they might never escape. In book threeâ¦ well, I donât want to give anything away. But readers can expect the same high-octane dark urban fantasy adventures all along.

Â 10. What are you reading at the moment?

Iâve just come back from Continuum X, the Australian national SFF convention, where Kirstyn McDermott launched her new horror novel, Perfections. I started reading that on the plane home and it got me hooked, so Iâll be reading that until Iâm finished now. Itâs not often a book leaps to the top of my reading pile, but there you go.

11. And finally, where to from here for Alan Baxter, Warrior Scribe?

Off into the sunset on a mighty, black steed! Well, back into what my wife refers to as my cave, which is actually the study/spare room. Iâm working on a new standalone horror novel, unconnected to Alex Caine or anything else. Always working on short stories, as I love the form. Iâve recently finished working on some quest dialogue for a videogame called Frontiers which is out later this year (or early next, Iâm not sure.) And hopefully the Alex Caine series will go gangbusters and I can write more of his story. The main focus right now is promoting Bound and hoping it gets some solid attention. Fingers crossed.

So, if you want to try before you buy, you can do some sample reading right here.

Obsidian and Abduction are coming in August and September respectively.Â

This entry was posted in News and tagged Alan Baxter, Bound, harpervoyager. Bookmark the permalink.

2 Responses to Bound by Alan Baxter