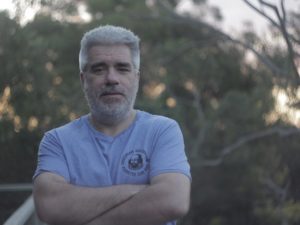 David StevensÂ  lives in Sydney, Australia, with his wife and children. He has worked in criminal law for 25 years, including a year spent in The Hague recently working with an international tribunal. His fiction has appeared in Crossed Genres, Aurealis, Three-LobedBurning Eye, Pseudopod, Cafe Irreal, the anthology Love Hurts, and elsewhere.Â  He blogs irregularly at davidstevens.info.

Inspiration, hmm. The original title for my story was ‘Cane Toads’, which will mean something to Australians. They can’t be resisted, they will replace all the fauna, they will consume all. As well, a lot of my horror stories start as jokes. Here, I re-imagined an old pulp cover or movie poster, removing the young nubile pneumatic blonde in the picture who is held by an alien, and replacing her with a middle-aged overweight Australian male.

The project involved a book! Not just a digital presence, but a physical aretfact. It turned into something more for me as well. Having a look at all the pies Lee and Dan have their fingers in, their larger community of writers and publishers and oh so many projects and such activity, has been an insight for someone like me who tends to dwell on the periphery (definitely on the edge).

I have several half or quarter written novels that I will get back to one day. I always had the idea that novels mattered, because they have heft, because they can take up space in a bookshop, and because I can get lost in them. With a demanding profession and four children, I have not had the concentration or time to finish them. Two of my daughters have a chronic illness. Most of my published short stories were written in the gaps around caring for them. I worked part time for a year so all of the burden did not fall on my wife. It was a time when I definitely needed something to call my own. A short story can be drafted (though not necessarily polished) in a short time, and you can keep the idea in your head the whole time. Completing them in that environment became precious to me. And attending a presentation by Cat Sparks and Angela Slattery and Lisa Hannett at the Sydney Writers Centre where they kept repeating: finish and submit … and submit overseas … then re-submit … well, I did, and now I have 14 stories published or due to be published soon.

I can’t remember! I have always read, and always thought I was going to be a writer, it just took me a long time to be published. I wrote many first chapters of books inspired by my favourite tv shows – Time Tunnel, Planet of the Apes – when I was young, what would now be called fan fiction (my 16 year old writes fan fiction and has hundreds of followers, she outdoes me in every way).

Next for me: I have a list of ten stories I want to write. I also want to get back t o finishing a novel. I had a lovely, lovely rejection for a short story which said, this is really the origin story for a novel, and they were right, I was compressing (out of cowardice?) the first two or three chapters of a novel which I now have to write. There, I’ve said it out loud.