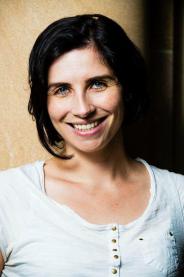 Newcomer Charlotte Nash already has a load of experience under her belt in the area of rural fiction and now she’s set to make a name for herself in spec-fic as well. You can read more of her speculative works here.

Below, Charlotte answers some questions about her D6 story, “The Message”.

The first novel I ever wrote (in 2007) was a sci-fi story called The Q Line. It was massively over-ambitious for my writing skills at the time (still is, I think) and ended up being quite terrible. I loved some of the ideas and the world (a post-apocalyptic city where people had been damaged by a quantum event), but it just never found a final form, despite several edits. However, one of the more peripheral characters in that story seemed to have secrets and a past that was never explored. The Dimension6 story started out with him front and centre, in a prequel that sets in motion the novel’s events, but it ended up exploring his crisis of self more deeply than I’d imagined, along with ideas of trust and allegiance.

Sitting in Kim Wilkin’s class in 2007. It wasn’t exactly knowing that I wanted to be a writer, just a sudden realisation that writing actually was something that people did as a serious career. That I could do it seriously. I have no idea why, with all the reading I’d done, that this idea had never registered before that.Â

… working hard at this moment, I would bet, but I couldn’t guess on what. I’m usually surprised by the turns the future takes. It’s more exciting that way.Â

My current spec fic project is an agricultural cyberpunk novel. Here’s the working blurb …Â Thumper is the kind of man the New Kingdoms claim no longer exists. A man without identity, in a world where everyone is known. Useful for a saboteur. Essential for an escape artist. Especially one who works for the black market, bleeding money from the FarmCorps automating the world. But when Thumper survives an attempt on his life, he’s faced with the worst kind of problem: someone he trusts now wants him dead. But discovering why leads to two places he least wants to go: down the rotten rabbit hole of the FarmCorps, and to Tak, the only rival to ever best him. But Tak is deep in the FarmCorps herself, a fault-finder who knows too much â about the corporation and Thumper â and she’s still holding a grudge.

One Response to Dimension6: Charlotte Nash