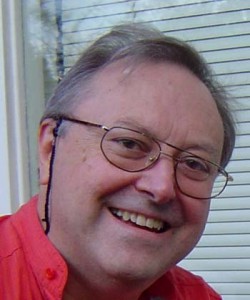 And tomorrow Dimension6 launches and can be found here. Today’s interview is with legendary Steampunk author Richard Harland, whose tale in D6 is “Ryder”.

“Ryder” travelled a long, long journey before it reached its final published form. It started with the idea of alternate realities – but not the realities themselves, rather the sensation of passing between them. The jolt, the dislocation, the sudden skip in the guts that wouldn’t be physical but mental â¦ and then finding your way into your new context, your new world, your new personal history. I toyed with that idea for years, and originally imagined it as something that might happen to a schoolkid on the way back from school – a sensation of passing across a non-physical boundary at some particular spot on the route. (I couldn’t swear I had that experience myself when I was really young, but it SEEMS like I did.)

The idea didn’t come fully to life until it took on a more specific setting – not contemporary, but back in the past, before WWI. With the new setting came the idea of a character who actually sought out the ‘boundary riding’ experience, who savoured it and was addicted to it as an ultimate thrill. Easy to relate that experience to so many real-world adrenalin-inducing experiences! And this character would be dangerous, remote, sort of sexy, with the appeal of the ultimate outsider. That led on to Sally as the kind of girl such a male would appeal to.

It was only when I got into the actual writing that I began to side wholly with Sally against Ryder. Yes, he has that dangerous sort of appeal, but he’s also quite limited. The thrill he loves is entirely self-centered, and although it involves a kind of risk taking, it’s a risk with no goal, no results. Sally is the real adventurer, with a different, higher kind of courage – she’s prepared to follow through. I wasn’t expecting the story to take that turn, but when it did, I knew it was right!

Later on, not in the writing but the re-writing, I discovered another angle that had been lying in wait for me. I’d thought of the ‘alien’ arrival as directly influencing an alternate development of terrestrial culture – but the more I looked into it, the more I realised that it didn’t have to be much of a direct influence at all. The mere fact of the aliens’ existence would be enough to shake up human imagination – to open up a space in which human beings can create for themselves. I like that idea: the aliens close themselves off, completely indifferent to our world, yet their mere presence stimulates all these wonderful and amazing changes. Like the speck of grit in the oyster shell! 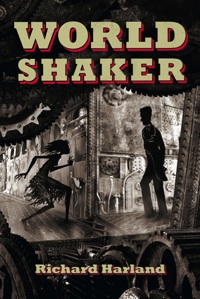 I find this really hard to answer because so many writers have influenced me, including all the obvious names. Let me list five who maybe aren’t so obvious: Mervyn Peake, Joan Aiken (the Wolves of Willoughby Chase series), Angela Carter (especially The Infernal Desire Machines of Dr Hoffmann), Jane Yolen (especially Cards of Grief), and last but not least, Fritz Leiber. Come to think of it, there’s a definite parallel between “Ryder” and Leiber’s The Big Time. So many conceptual hares that novel sets off running!

It happened for me when I was 11 years old, and growing up in England. My best friend was my cousin Andy, who lived just down the road, and there was an area out the back of his house that we called the ‘chicken run’. No chooks, but an amazing junkyard with rubber tyres, tin baths, packing cases, carpets, sheets of corrugated iron, you name it. We used that junk to build planes, submarines, castles, all sorts of things – and large-scale too. Then we made up adventures that could happen in the things we’d built, coming back every day after school and adding on extra episodes for weeks on end.

One time when we were bored and trapped indoors by the rain, we wrote out about half a dozen of those adventures. My girl cousin, Kitty, read them and was impressed (first time she’d ever been impressed by anything we’d done!) and said we ought to sell them at school and make some money. So we made copies, took them to school – and our stories were a smash hit! Everyone wanted to read them â¦ only they didn’t want to pay for them, they wanted to do swaps for them.

We got all sorts of things in swaps, most of them useless, but that was when I first learned the thrill of having someone say, ‘Hey, really liked that story, have you got another one?’ I mean, the thrill when you realise that something you imagined in the privacy of your own head has gone across into someone else’s head. They lived through it and shared the experience with you! Best feeling in the world!

That was what got me started. I won’t tell you about the 25 years of writers’ block that held me back â¦

4. Finish this sentence: the future of Australian spec-fic is …Â

… who knows? I’d sooner predict the state of the world. Australian fantasy has made it big overseas, and Australian horror movies punch way above their weight, so hopefully Australian SF and Steampunk can follow suit. The talent’s around, all that’s needed are a few big slices of luck.

My next project is very BIG and very secret. I could tell you but then I’d have to kill you (which is difficult via cyberspace).