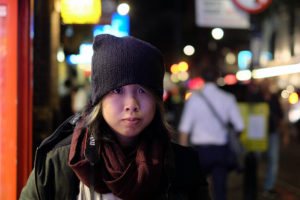 Cassandra Khaw is a London-based writer with roots buried deep in Southeast Asia where there are sometimes more ghosts than people. Her work tends to revolve around intersectional cultures, mythological mash-ups, and bizarre urban architecture.

When not embroiled in fiction, she writes about technology and video games for a variety of places including Eurogamer and Ars Technica UK. She really likes Coca Cola-flavored gummy bottles. And plushies! She loves fuzzy animals. Her best friend is a woodland bunny named Judy.

She is repped by Michael Curry of Donald Maass Literary Agency and took some time out of her busy schedule to be offended by my impertinent questions.

But really, she’s one of my favourite up-and-comers – read her!

1. First of all, what do new readers need to know about Cassandra Khaw? 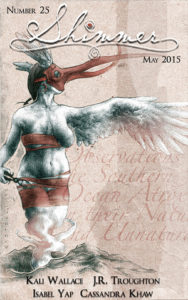 She really, really likes plushies, and if you meet her at a convention and ask nicely, chances are she’ll introduce you to a tiny emergency bunny named Jelly. (Is this such a strange eccentricity? To an extent. But I swear there’s good reason for it. When my dad died, I became attached to a fuzzy gray bunny plush named Judy. For months, I couldn’t function if I was away from her from more than a few hours. Took towards carrying the plush in my bag. But that became ungainly. Eventually, I acquired her miniature version â who now lives in my laptop bag always.)

2. Can you remember the first story you read that made you think âI want to be a writerâ?

Oh, toughie, that one. A big part of my inclination towards storytelling was my father’s influence. My earliest memories were of him weaving strange, half-mythic stories of his life and whatever he could remember of things he’d read. I grew up on the strangest things. Later, he’d start buying me books, him and my mom. Anyway. If I had to point to a single story I’d read, it is probably this … story from a fairy tale compendium that they’d bought me ages ago. Something about a princess, pale as glass, (it was illustrated) who needed to be carried across a river. She lounged on a boat, gossamer and snow, as a beautiful man steered them. I have NO idea if that was exactly the story I read, but I remember stroking my fingers across the paper, remember memorizing that picture (I was probably 4? 5?), and remember wanting to make something just like that. 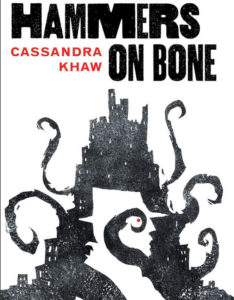 3. What was the inspiration for Hammers on Bone?

Not a happy story. Hammers on BoneÂ is based on the particulars of a real life case, with some of the dialogue taken directly from interview transcripts. The protagonist, of course, is fictional. But the underlying themes of abuse, the fact that there were two kids at the heart of this â all that part is true. I wrote it initially in an outburst of desperation. Being only tangentially related to the situation, I couldn’t do a damn thing. I was just there. Helplessly watching. So I started to write something because I had nowhere else to channel that energy. And I wanted to give the kids a happier ending â somewhere where they wouldn’t be hurt. Slowly, though, that changed. I went from wanting to write them a different ending, to wanting to write something that could be given to them when they’re older: a reminder that you can bleed your monsters, a reminder that your monsters can hurt. I wanted to tell them it was never going to be okay the way it is for some other kids, but you can have teeth and fangs too, you can survive whatever you’re suffered.

4. One of my favourite stories of yours is âAnd In Our Daughters We Find A Voiceâ: itâs absolutely astonishing and confronting and beautiful. Where did that idea spring from? Or all of those ideas? 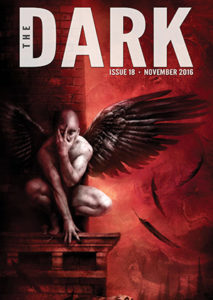 I honestly don’t remember. I think I started writing that story when I was in a slump, and convinced that I had absolutely no capacity for writing and everything was a flu â no, wait. I remember now. It was college humor. They ran a comic strip about ‘how Disney princesses are as mothers’ and one involved Ariel spewing out thousands of little eggs. It made me laugh and it made me think. So, that combined with the ‘Can I even write wagh’ vibes that I was having that day, it all started to come together. I wanted a toothy, deepwater mermaid that wasn’t anything like the Disney version. As I wrote, the mermaid started adopting traits from my mother â someone who’d been quiet forever, who endured torments for her children. My mom found a bloodless exit to her troubles. (She’s happy and healthy right now, thank you very much.) But I figured she might have wanted to stab my father at some point, so this is my nod towards her hypothetical impulses.

5. Cruel question: science fiction or fantasy? You can choose only one ? why do you choose what you choose?

WHY WOULD YOU DO THIS TO ME â uh. Fantasy. I grew up in Malaysia, a country of ghost stories, a place where we hold operas for the dead, keep street shrines for little gods. The idea of the supernatural is part of me, for all that I might believe in it. I grew up, breathing myth and urban legend. I can scarcely give that away for some random bits of technology. (Please don’t keep my electricity.) 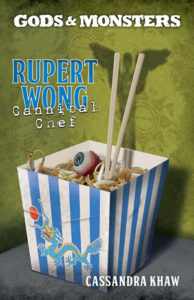 6. Even more cruel question: fairy tale or myth? You can only ever use one as a story anchor ? why do you choose what you choose?

ANGELA. Do you just hate me? Do you? DO â actually, no. That’s an easier question. Riffing on my previous answer, I grew up elbows-deep in mythologies. There’s an abundance of them out there, and I’m not talking about the Greecian or Nordic varieties. Hundreds of cultures. Hundreds of localized deities. Hundreds of possibilities. Myth would definitely be my choice here.

I don’t think I really have a favorite movie, although I love DARK CITY deeply. If I had to pick, I’d actually say THE MATRIX. As for favorite TV show, that’s easy. We Bare Bears:Â https://www.youtube.com/watch?v=l3FoZelBGXU

8. Youâre sent to a desert island and you can take only five books, so what are they?

Girl in the Well

9. When youâre in the mood to read, who do you choose? 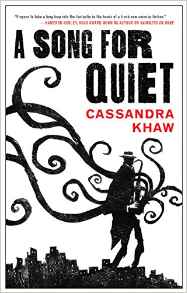 What. No fair. I’m always in the mood to read but I’m also weirdly absorbent. My writing tends to get influenced by whomever I’m reading at the moment. So, if we’re talking about who I want to read while I’m busy with a project, it’d go something like this.

You or Ursula Vernon when I’m in the mood to sculpt a fairy tale.

Jonathan L. Howard when I inexplicably want to sound British.

10. Whatâs next for Cassandra Khaw?

HOW DARE â ohwait. God. I don’t know. This is the year where I plan to finish my novel. I’m also drafting out a picture book based on my ridiculous 100 Beauty Tips From Beyond tweet series, drafting out a nonfiction book, drafting out a Persons non Grata novelette, drafting out a silly rom-com about a girl who can’t cook who really wants to run a food truck and â what were we talking about again?

This entry was posted in News and tagged A Face Like Glass, A Song fro Quiet, Cassandra Khaw, City of Blades, Dark City, Girl in the Well, Hammers on Bone, the bitterwood bible, The Dark Magazine, The Matrix, The Starlit Woods, tor.com, We Bare Bears, âAnd In Our Daughters We Find A Voiceâ. Bookmark the permalink.