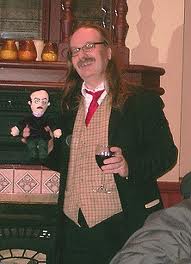 Kim Newman is one of my favourite writers; I do like to think of him as the Dandy Highway Man of Horror. He is, among other things, a superb writer, a perceptive critic, and an inveterate wearer of cravats.

I think theyâre all worn on the sleeve, for a change â I was thinking of pretty much everything that was happening in France in the late 1890s, and the way French history and culture fed into the gruesome type of theatre known as Grand-Guignol, and mapping that onto more recent trends in explicit horror.Â  Itâs part of a cycle Iâve been writing called Angels of Music, which will turn up as a book in the near future â and thatâs a gloss on Charlieâs Angels and the Phantom of the Opera, playing with the adventuresses of 19th and 20th century fiction.Â  Iâve done stories riffing on Stoker, Stevenson and Doyle, so this time I looked to French creators like Gaston Leroux, Louis Feuillade, Alfred Jarry and Oscar Metenier for source material.Â  My first trio of angels was Christine Daae (from the Phantom of the Opera), Irene Adler (from Conan Doyle) and Trilby (from George du Maurier) â¦ but this story features Kate Reed (from Bram Stoker, very loosely), Clara Watson (from Octave Mirbeau and the Grand-Guignol adaptation of Torture Garden) and Yuki Kashina (from the Lady Snowblood films).Â  Having used well-known characters earlier, I wanted to go with less familiar folks this time â Kate, whom Iâve been developing in my Anno Dracula and Diogenes Club stories, gets a Paris holiday and is very much the lead this time round.Â  I listened to a lot of Offenbach while and watched a lot of video nasties writing the piece.Â  The Angels of Music will return in Phantom Ladies Over Paris.

âThe Sea Raidersâ by HG Wells.Â  Itâs the one about killer jellyfish.

As a critic, I spend a lot of time putting books and films into genre boxes, but as a writer I tend to try to escapeÂ  from them.Â  I think I write Kim Newman stories rather than horror or science fiction or whatever â though I have used titles like âAnother Fish Storyâ and An English Ghost Story to signify my attempts at staying neatly inside the box while trying to do things that interest me with the forms â but thatâs a good thing, since no one else is going to write them, really.

I am fond of libraries â¦ though I let more invitations slide than take them up these days.