How have I missed this?

I don’t know how I missed this, but consider myself dreadfully remiss. Brain (Lisa L Hannett) did a post on fairy tale girls, which is great. And here in all its clever glory.

There was a fantastic panel at Swancon â with Ellen Datlow, Richard Harland, Jenny Blackford, Amanda Pillar, and Brain (aka Angela Slatter) â in which the panelists were kicking around many ideas about fairy tales: the evolution of the form; classics and modern retellings; questioning the theory that these tales are intended to be cautionary. This last point got me thinking about the lessons such narratives were supposed to impart, and to whom they were meant to be addressed. I asked a question of the panel about the irony of womenâs roles in these stories, but since my thoughts werenât fully formed on the matter I couldnât articulate what I meant clearly â not to mention the fact that it was getting on in the day, I hadnât consumed nearly enough coffee, and Iâd spent all my energies being articulate on the Steampunk panel immediately before the fairy tale session. So I began a train of thought, but it was not quite resolved that day.

And an amusing and appropriate cartoon from Dave Gauld via Rob O’Connor: 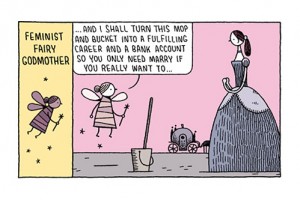