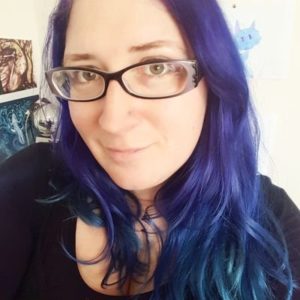 And we’re finally back with the At the Edge anthology interview series! Today, J.C. Hart talks about “Hope Lies North”.

J.C. Hart is a mother and writerÂ who resides in Taranaki, NZ, cushioned between the mountain and the sea. She is the author of several works of both long and short fiction, which includeÂ several short stories in award winning anthologies, of which,Â The Dead Way,Â whichÂ was a finalist for the Australian Shadow Awards 2014. Alongside her writingÂ J.C. is also a freelanceÂ editor, and the co-chair of LexiCon 2017 –Â the 38thÂ NZ National Science Fiction and Fantasy Convention. You can find her on Twitter @JCHart.

My story, Hope Lies North, was inspired by the landscape along State Highway 3 in New Zealand, particularly Awakino gorge, Mount Messenger, and the surrounding areas. Iâd been mulling over what to write for this anthology for a long time, the deadline was getting close, and all I had was a severed hand, a changing landscape, and perhaps a dead baby. We were travelling (north) to Auckland for a wedding and I let my husband drive so I could stare out the window and daydream. I made a lot of notes, took a few blurry photos, and the story snowballed from there.

Iâd worked with Dan and Lee before on the Baby Teeth anthology. I knew from that experience that they could knock together an awesome collection, the theme of this one really appealed, and so naturally I wanted to be a part of it. Also, there was the rather alluring draw of anonymous submissions. Itâs always a nice buzz when you know that your story is selected on its merit alone, not on who you are or who you know. I was eager to put my story to the test, and thrilled when it passed muster.

As a reader, I love that short stories throw you right into a world and donât let go until the end. I love that I can get a slice of something amazing, and be drawn in and satisfied within a short period of time.

As a writer, I love the challenge they present. You only have a small number of words, and you have to make every one of them count. They are also enormous fun and provide so many opportunities to explore ideas, themes, and techniques.

I canât say that I do, actually. I feel like Iâve been reading forever, but writing for even longer. The earliest books I can remember were things like Where the Wild Things Are, the influence of which one might say can be seen in some of my work â fierce situations, fierce people, but where the act of loving someone, really truly, is apparent in actions more than words.

In the next month or so Iâm hoping to release a short fantasy novel told in three parts called Serafinaâs Flame. I released the first part last year (Burn), and am looking forward to getting the completed story out there in the world. Iâve also just started working on something a little darker than my current titles, and more in line with the kinds of short stories I like to tell â but in a longer format. It should be fun, and more importantly, creepy!

This entry was posted in News and tagged At the Edge, Australian Shadow Awards, Baby Teeth, Dan Rabarts, J.C. Hart, Lee Murray, Paper Road Press, where the wild things are. Bookmark the permalink.