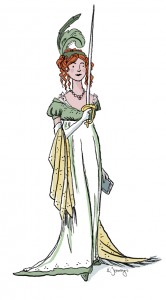 Because no interview is complete without a Kathleen Jennings portrait.

She is also the author of the upcoming Lady Helen series, a trilogy of historical supernatural adventures set in the Regency. The first book â The Dark Days Club â has been released into the wild as of January 2016. Alison is best known for her New York Times bestselling fantasy duololgy EON and EONA. She is also a noted dancer of the English contra-dance (which I like to think of as Freestyle Disco Dancing – google âMitchell and Webb Posh Dancingâ). She also writes award winning science fiction and crime fiction, and lives with her lovely husband and their machiavellian Jack Russell Terrier in Melbourne, Australia.

1. So, Lady Alison, tell us about your new novel, Lady Helen and the Dark Days Club! 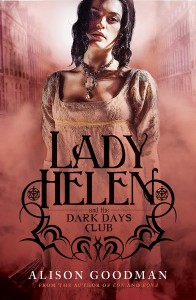 When in a flippant mood, I call it Pride and Prejudice meets Buffy. When I have my serious author pants on, I call it a coming-of-age historical/supernatural adventure. It follows Lady Helen Wrexhall as she discovers that her opulent Regency world has quite a disturbing â and demonicÂ â underbelly, and that the mysterious Lord Carlston has returned from exile to draw her into a deadly struggle against fiendish hidden predators.Not quite what a girl expects in her first London Season!

2. Can you recall the first story you read that made you want to be a writer?
The Outsiders by S. E. Hinton. I was about thirteen and had been dragged along to a dinner party by my parents. While the adults ate prawn cocktails, beef stroganoff and talked politics, I took refuge in the living room to finish The Outsiders. Ponyboy, Sodapop, and poor tragic Johnny. I ended up bawling my eyes out in my borrowed bean-bag, partly because of the sad ending but mainly due to the realization that a good deal of my devastation had been created by the terrible beauty of the bookâs circular structure. Thatâs when I truly wanted to become a writer.

3. Lady Helen is a bit of a departure for you from your Eona days â and from Singing the Dogstar Blues â what can you tell us about the switch?
I donât really think of it as much of a switch from the Eona books or Singing the Dogstar Blues. They are all stories about a young woman coming into her own power â that is what I love to write about.That is my passion.Having said that, there is one huge difference: Lady Helen is historically accurate and folds in real historical events â such as the assassination of the British Prime Minister in 1812 â whereas Eon and Eona are set in a fantasy world based on medieval China, and Dogstar is in a near future Melbourne.For the Lady Helen series, I set myself the challenge of creating an accurate and vivid Regency England, a task that is both enormous fun and a huge headache. For instance, it took me half a day of research to discover whether a lady would carry her reticule into Almacks and dance with it, or leave it in the retiring room! The answer is in Chapter Sixteen (she laughs evilly). 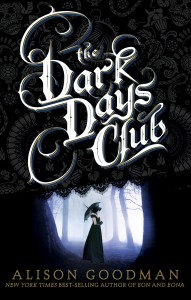 4. What appeals to you about the Regency period? Is it just an excuse to get dressed up (which is a perfectly acceptable answer)?
I cannot lie â dressing up is part of it. Who doesnât love prancing around in a bonnet, white gown and spencer jacket? Also, I love the parallel between Regency society â a time of war, civic unrest, rampant consumerism, and celebrity gawking â and our own society. The Regency veneer of politeness is also a great playground for a writer.

5. Who were/are your literary heroes/influences?
My literary heroes and heroines are the wonderful teachers and mentors I have had through my writing career. Alan Maher, Gerald Murnane, Judy Duffy, Janet Turner Hospital, Robert McKee, Delia Falconer and Antoni Jach.

6. What was the most surprising thing you discovered in your research for Lady Helen and the Dark Days Club?
The level of violence; it was essential to be armed or accompanied by stout footmen when out and about in London.The three Lady Helen novels are all set in 1812, and England did not have a police force at that time. Violent crime was rampant. In fact, the first highly publicized serial killings â the Ratcliffe Highway murders â occurred at Christmas in 1811. The newspapers were full of the gory and brutal details â lovely festive reading. Brutality, however, seemed to be a part of everyday life. One ladies magazine even had a section titled “Incidents occurring in and near London, interesting marriages, &c”, which was basically a detailed list of gruesome crimes wedged in between the latest fashions.

7. Name five Regency folk youâd like to have dinner with â and who would you absolutely NOT invite. 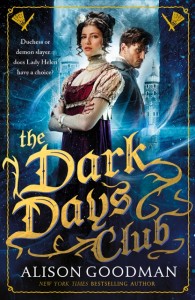 Iâm going to use the extended Regency time span so that I can invite Mary Wollstonecraft, Napoleon, Beau Brummell, the Prince Regent (Prinny) and Jane Austen. Seating would be quite difficult as Miss Austen did not approve of Prinny, and he, in turn, was at war with Napoleon. Even so, I think the table conversation would be quite interesting. I would not invite Lord Byron â what a poser.

8. Who is your favourite villain in fiction?
Black Jack Randall in Outlander by Diana Gabaldon.

9. What are the five novels that have influenced you the most?
1. The Magic Faraway Tree, Enid Blyton. The first fantasy novel I ever read (I was in grade 1) and it blew me away.
2. The Outsiders by S.E. Hinton, for the aforesaid reasons.
3. These Old Shades by Georgette Heyer. My introduction to the 18th and 19th centuries and where my obsession with the Regency was born.
4. The Crying of Lot 49 by Thomas Pynchon. The humour, the ideas, the weirdness. Just wow!
5. If on a Winterâs Night A Traveller by Italo Calvino.A postmodern masterpiece and everything you ever want to know about creating poignant relationship triangles in fiction, all in beautiful prose. 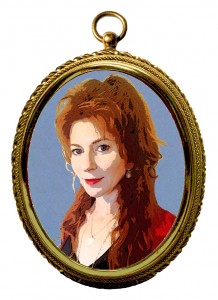 10. Whatâs next for Ladies Helen and Alison?
Iâve just submitted Book 2 in the Lady Helen Series, which is set in Brighton during the summer social Season, and Iâm about to embark upon Book 3, set in Bath during the winter Season. Iâm also writing a short Regency adventure called âThe Benevolent Society of Ill Mannered Ladiesâ for a new anthology of adventure stories called And Thenâ¦The Great Big Book of Awesome Adventure Tales which will be published next year by Clan Destine Press.