Last Year, When We Were Young: Andrew McKiernan 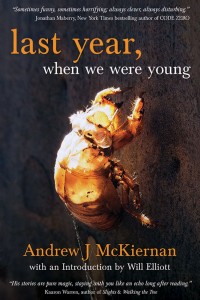 Andrew J McKiernan is an author and illustrator from Narara, on the Central Coast of New South Wales. First published in 2007, his stories have since been short-listed for multiple Aurealis, Ditmar and Australian Shadows awards and reprinted in a number of Year’s Best anthologies. He was Art Director for Aurealis magazine for 8 years and his illustrations have graced the covers and internals of a number of books and magazines.

His debut collection, Last Year, When We Were Young – described by New York Times bestseller Jonathan Maberry as “A troubling collection of weird and twisted tales. Sometimes funny, sometimes horrifying; always clever, always disturbing. Highly entertaining!” – was recently released in print and ebook formats by Satalyte Publishing and can be purchased on Amazon.

So, what do new readers need to know about Andrew J McKiernan?
I’m an author and (occasional) illustrator living on the Central Coast of New South Wales, Australia, with my wife, two teenage boys, and two cats. At various times in my life I’ve been a bank teller and a warehouse storeman, a purchasing and logistics officer, a production manager, a graphic designer, a web developer, a typesetter and an Art Director. I’ve played in bands, was a member of a secret occult organisation, and my wife and I were ordained priest and priestess of a Gnostic Church for almost ten years. I currently work part time at one of those weird/creepy self-storage facilities.

What was the inspiration behind your new short story collection, Last Year, When We Were Young?
Less an ‘inspiration’ and more an initial request from Satalyte Publishing to see everything I’d published to date. This is all the stories I’ve written and published since 2007 and, though I tried to find an order and flow that works for the collection, there isn’t really any over-arching theme or inspiration. I guess that, mainly, it’s a line drawn in the sand. I certainly haven’t given up on short stories, but my focus for now is novels, and I (and my publisher, Satalyte) thought this was a great way to bring everything together as a sort of milestone.

How did you connect with Satalyte Publishing?
They contacted me. I’d been posting little ‘Work In Progress’ snippets to Facebook from a crime novel I was working on called A Quiet Place. Seems those snippets were enough to catch the eye of Satalyte’s owner, Stephen Ormsby, and he asked to see what I had. I’d written less than 5,000 words at that stage, only three chapters, but he read that and offered me a contract straight away. That’s when he asked to read my previously published short stories too. I think he read them while he was in a hospital waiting for his wife to give birth to their daughter. A few days later, Stephen called me back and made me an offer to publish the collection.

What attracts you to the darker side of fiction? 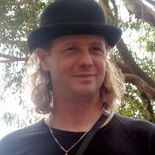 I really don’t know, and I’d prefer not having a psychologist poking around trying to find out why. I was watching Universal and Hammer films from a really early age, probably 6 or 7. And lots of B- and Z-grade stuff too (Roger Corman and the like). My mum is a huge film buff, all types of films from the best to the worst, and that gave me a good grounding. My grandmother (my mum’s mum) was more a book-nut, and she was also the cleaner of our local library. She’d take me with her at night, and I’d have the entire place to myself, all the aisles dark and towering around me with books. She let me borrow books from the ‘Adult’ section, so I got to read Dracula and Frankenstein and Shirley Jackson fairly early on too. I read Carrie sometime between the age of 9 and 10; read it aloud at lunchtimes to a group of entranced 4th Grade girls from my school. So, I really don’t know what the attraction is — no childhood traumas, loving family, normal upbringing, nothing to mark me as especially weird — but that attraction has certainly always been there.

In general, who and/or what are your writing influences?
Oh boy, I collect influences like some people collect Beanie Babies! Lovecraft and Clark Ashton Smith. Shirley Jackson and Flannery O’Connor. William Faulkner. Cormac McCarthy. Daniel Woodrell and James Sallis. William Gay. Tim Winton. Margaret Atwood. Paul Haines and Kaaron Warren and Dale Bailey and Nathan Ballingrud. I like to think all these authors have changed/influenced/improved the way I write to some degree.

Who is your favourite villain in fiction?
Judge Holden from Cormac McCarthy’s Blood Meridian. Seven feet tall and totally bereft of body hair (even eye-lashes), skin pale, and enormously strong. Scalp-hunter, murderer, naturalist, nihilist, philosopher. There are even hints that the Judge is more than just a mere man and something supernatural. He’s one very scary guy!

When did you first decide you wanted to be a writer?
If there was a moment, I don’t remember it. I’ve been writing for as long as… well, for as long I could write, I guess. I entered short story contests from the age of 6 or 7 onwards. Just local things, Council Library and Book Week and that sort of thing. Won a few. But, it was just something I did. I never really thought it was something I would actually DO, like become an astronaut or a lion tamer. And then I left high school to become an English Teacher, deferred Uni to get a job and a car, and… never made it back to Uni. I became stuck working horrible day jobs and thought that was life, until my wife told me to write something seriously and submit it. I took her advice (which is always a sensible thing to do) and my first story (‘Calliope: A Steam Romance’) was accepted by the first anthology submission call I sent it to. Maybe that was the moment I realised that I’d always wanted to be a writer, but never dared consider it. Now, I don’t want to be anything else.

What scares you?
Bigotry. Our government. The gullibility and ignorance of people. The future. 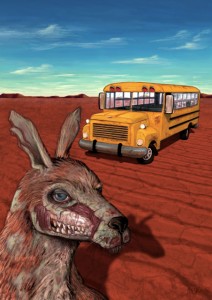 Name five people, living or dead, you’d like to invite to dinner?
British comedian David Mitchell; Actor Richard E. Grant; Author Iain Banks (now, so sadly, deceased); Author Margaret Atwood; Author Paul Haines (because I never got the chance to just sit down, and eat and drink, with one of the most amazing people I ever had the fortune of knowing).

What is next for Andrew J McKiernan?
Finish the crime novel. That is the only thing that is next for me at the moment. A Quiet Place is due to Satalyte this year, and I’ve still got a ways to go. But, I’ve shut down my web-development/graphic design business and stopped accepting illustration commissions. Even though this is my first attempt at writing something so large, my head is in a good place and I’m still confident I can maintain the pace and the quality and reach an ending that works. Once that’s done, I have other novel ideas — an historical bushranger novel, for instance — and a few more Clowntown stories to write. But, for now, the novel is where my head is staying.

This entry was posted in News and tagged Andrew J McKiernan, Last Year When We Were Young, Satalyte Publishing. Bookmark the permalink.

2 Responses to Last Year, When We Were Young: Andrew McKiernan