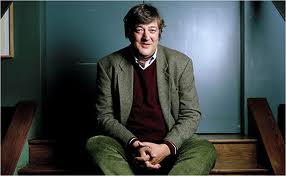 Thanks to the evil genius of Rob O’Connor and Martin Livings I am now armed with the knowledge that Stephen Fry is bringing QI to Australia, specifically to Brisbane.Â  And he’s bringing some bloke called Alan Davies with him.

So I booked tickets – possibly not the best expenditure of funds for someone who is going to be not working next year as she is going to be an impoverished fulltime writer finishing novelsÂ  but … it’s STEPHEN FREAKING FRY!!!