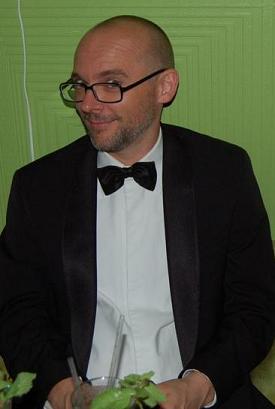 Sean Williams is a prolific author of fantasy and science fiction – oh, and yeah, he’s talented too. Sean’s series include The Books of the Change, Astropolis, Geodesica, Broken Land … and of course, those Star Wars books.Â He has a choclit habit. He was also kind enough to consent to be the first victim of a weekly series I’m going to run in the lead-up to WorldCon (and maybe afterwards if anyone is still talking to me).Â Sean may now regret it. ð

The Drive-Bys are a bunch of mini-interviews, 5 questions only, the last question is always the same – I like to think tof it as the control question, where victims valued and adored interviewees show their mettle. Some interviewees will be established writers, some up-and-comers, some will be editors, some illustrators,Â some agents and some publishers – have I got everyone there?

But enough of waffling! Here, for your reading pleasure and edification, is Sean Williams.

1. If I didnât write, I would …Â
Ursula le Guin tackled this issue best.

Q: âIf you werenât a writer, what would you be?â

Right on. If there isnât part of you that feels this way, then you shouldnât be a writer. Maybe Iâd also add âDead boredâ, because thatâs what I am when Iâm not writing. But if I had to choose, if you put a gun to my head and the world banded together to beg me not to write another word, please god, then Iâd probably go back to one of my other true loves: music (I studied it at uni and even won a Young Composerâs Award, back when I was young), maths (which is not so different, really, from music or writing), or astronomy (because you can never peer through too many telescopes). Or some awesome mixture of the three. What would that be? I donât know, but someone should invent it.

2. I love/hate writing to a theme because …Â
There are lots of things I love/hate about writing â deadlines, reviews, being my own boss, the endless chocolate binges â but writing to a theme isnât one of them. I love it. Constraints are good (imho) because they force you to find innovative, creative, exciting solutions to a problem you might never have confronted before. And itâs okay if you canât find a solution: who would want to write anything other than innovative, creative, exciting? Better to abandon the theme than risk that. I treat themed anthologies as a kind of dare, in order to see what kind of writer Iâm able or prepared to be.

Itâs probably not entirely safe to mention Star Wars in this context, but Iâm going to anyway. I love mucking around in that big olâ galaxy â the bigger it gets, the more interesting backwaters there are â and writing to theme is very much part of the package. Everyone knows what the deal is with Star Wars, right? So the whole point of writing for a franchise is giving people what they expect while at the same time giving them a book that is surprising, fresh, and challenging. Obviously thatâs difficult; obviously individual books succeed or fail to varying degrees on each point because itâs probably impossible to succeed at both; obviously no one should ever see the creative decisions made in producing the final product. But itâs those decisions, juggling those inherent tensions, that make writing for Star Wars a productive thing for me. Itâs not just about the money, honest (but how else am I going to pay for all that chocolate?).

3. Who is your favourite fictional character and why?Â
You know, Iâve never been asked this outside the Star Wars universe. Favourite books, favourite authors, favourite genre â sure.Â  But not favourite fictional character. And … hmmm. Itâs hard. Iâd say the Doctor except I want to give you an answer that comes from a book rather than a TV show so Iâll sound clever. (But hell, thatâs actually how I discovered Doctor Who: through the Target novellisations, way back in the 70s. Doesnât that count? Shhh.) Iâve been thinking through some of my favourite series, looking for smart answers: Ged/Sparrowhawk from Earthsea would be there; so would Aubrey and Maturin of the Patrick OâBrian novels; Louis Wu from Ringworld; Hercule Poirot â where to stop? How to justify them? Why are these all blokes? My brain hurts.

Â In the end, Iâve settled on a man who is strong but knows when strength isnât enough, smart but always interested in learning new stuff, handsome but only in the right light, and articulate but only ever when thereâs something to say. In a genre (thrillers) full of muscle-bound shitheads who treat women like dirt, thereâs really only one guy who gets my vote, and thatâs Lee Childâs Jack Reacher. Long may he reign.

4. Which is your favourite of your own books? Which is your preferred baby?Â
The next one. No, the last one. Wait, the first one. What about the one Iâm writing right now â or the one I havenât even started yet? Argh!

Choosing between books is exactly like choosing between your kids. You shouldnât be able to. No one should ask you to. Why are you doing this to me???

5. Most importantly: donuts (or doughnuts) or danishes?Â
Donuts (chocolate), if theyâre made well. Otherwise, croissants (chocolate) are the perfect accompaniment to a hot drink (chocolate) on a wintery Adelaide day. I think Iâll have one right now. Thanks for putting the thought in my head. (It might have been lurking in there already.)