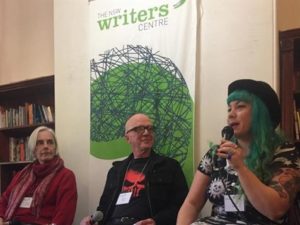 The biennial Speculative Fiction Festival is an extraordinary festival organised by the New South Wales Writers Centre, the peak organisation for writers in New South Wales. Held in the historic building of the NSW Writersâ Centre surrounded by beautiful grounds and complete with evening drinks on the verandah, this event is less like the stampedes, crowds and commercial trafficking of books that we have come to expect with the larger writing festivals, and more like a select party with special friends.

The festival feels like a Sydney secret and provides a rare opportunity for a small but remarkably diverse group in terms of age, gender, and ethnicity to come together and discuss fiction that sits outside the field of so-called âliteraryâ fiction. Interestingly, during the panel discussing short stories, when the audience was asked the question how many people actually wrote short stories themselves, a good three quarters of the people in the room put up their hands. It would appear that the audience for the Speculative Fiction Festival is largely writers and it is probably this aspect of the festival that gives it its own very distinct flavour and feel.

This festival does however provoke some questions about other writing festivals in Australia which often seem to ignore Speculative Fiction.