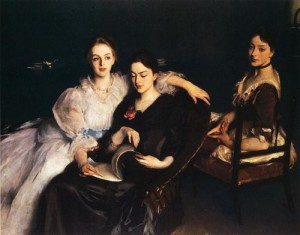 So, “St Dymphna’s School for Poison Girls” has had a redrafting, which means the beginning is a bit more interesting than the version I posted a few weeks ago. It is also, at 15 112 words, the longest short story I’ve ever written. It will need a bit more polishing to get it into shape, but below is the opening once again so you can get an idea of what I’ve done.

âThey say Lady Isabella Carew, nÃ©e Abingdon, was married for twenty-two years before she took her revenge,â breathes Serafine. Ever since we were collected, she, Adia and Veronica have been trading stories of those who went before us â the closer we get to our destination, the faster the stories come. Â

Veronica takes up the thread. âItâs true! She murdered her own son â her only child! â on the eve of his twenty-first birthday, to wipe out the line and avenge a two-hundred year old slight by the Carews to the Abingdons.â

Adia continues, âShe went to the gallows, head held high, spirit unbowed, for she had done her duty by her family, and her name.â

On this long carriage journey I have heard many such recountings, of matrimony and murder, and filed them away for recording later on when I am alone, for they will greatly enrich the Books of Lives at the Citadel. The Countess of Malden who poisoned all forty-seven of her in-laws at a single banquet. The Dowager of Rosebery, who burned the ancestral home of her enemies to the ground, before jumping from the sea cliffs rather than submit to trial by her lessers. The Marquise of Angel Down, who lured her father-in-law to one of the castle dungeons and locked him in, leaving him to starve to death â when he was finally found, heâd chewed on his own arm, the teeth marks were dreadful to behold. Such have been the bedtime stories of my companionsâ lives; their heroines affix heads to the ground with spikes, serve tainted broth to children, move quietly among their marriage-kin, waiting for the right moment to strike.

The carriage slows as we pass through Alderâs Well, which is small and neat, perhaps thirty houses of varied size, pomp, and prosperity. None is a hovel. It seems life for even the lowest on the social rung here is not mean â that St Dymphnaâs has brought prosperity. There is a pretty wooden church with gravestones dotting its yard, two or three respectable mausoleums, and all surrounded by a moss-encrusted stone wall. Smoke from the smithyâs forge floats against the late afternoon sky. There is a market square and I can divine shingles outside shops: a butcher, a baker, a seamstress, an apothecary. Next we rumble past an ostlery, which seems to bustle, then a tiny school house bereft of children at this hour. So much to take in but I know I miss most of the details for I am tired. The coachman whips up the horses now we are through the hamlet.

Iâm about to lean back against the uncomfortable leather seat when I catch sight of a well â the well for which the place is named â and a tree beside it. I should think more on the well, for itâs the thing, but I am distracted: I think I see a man. He stands, cruciform, against the alder trunk, arms stretched along branches, held in place with vines, which may be mistletoe. Green barbs and braces and ropes, not just holding him upright, but breaching his flesh, moving through his skin, making merry with his limbs, melding with muscles and veins. His head is cocked to one side, eyes closed, then open, then closed again. I blink and all is gone, there is just the tree alone, strangled by devilâs fuge.

My comrades have taken no notice of our surrounds, but continue to chatter amongst themselves. Adia and Serafine worry at the pintucks of their grey blouses, rearrange the folds of their long charcoal skirts, check that their buttoned black boots are polished to a high shine. Sweet-faced Veronica turns to me and reties the thin forest green ribbon encircling my collar, trying to make it sit flat, trying to make it neat and perfect. But, with our acquaintance so short, she cannot yet know that I defy tidiness: a freshly pressed shirt, skirt or dress coming near me will develop wrinkles in the blink of an eye; a clean apron will attract smudges and stains as soon as it is tied about my waist; a shoe, having barely touched my foot, will scuff itself and a beribboned sandal will snap its straps as soon as look at me. My hair is a mass of â well, not even curls, but waves, awkward, thick, choppy, rebellious waves of deepest fox-red that will consent to brushing once a week and no more, lest it turn into a halo of frizz. I suspect it never really recovered from being shaved off for the knitting of Motherâs shroud; I seem to recall before then it was quite tame, quite straight. And, despite my best efforts, beneath my nails can still be seen the half-moons of indigo ink I mixed for the marginalia Mater FriÃ°uswith needed done before I left. It will fade, but slowly.

The carriage gives a bump and a thump as it pulls off the packed earth of the main road and takes to a trail barely discernable through over-long grass. It almost interrupts Adia in her telling of the new bride who, so anxious to be done with her duty and keep her maidenhead intact, plunged one of her pearl-tipped, steel-reinforced veil-pins into her new husbandâs heart before âVoloâ had barely left his lips. The wheels might protest at water-filled ruts, large stones and the like in their path, but the driver knows this thoroughfare well despite its camouflage; he directs the nimble horses to swerve so they avoid any obstacles. On both sides, the trees rushing past are many and dense. It is seems a painfully long time before the house shows itself as we take the curved drive at increased speed, as if the coachman is determined to tip us all out as soon as possible and get himself back home to Alderâs Well.

St Dymphnaâs School for Poison Girls is a rather small-looking mansion of grey-yellow granite, largely covered with thick green ivy. Only the windows with their leadlight panes are free of foliage. The front door is solid, a scarred dark oak â by its design Iâd judge it older than the abode â banded with weathered copper that reach across the wood in curlicues.

Our conveyance slews to halt and the aforementioned front door of the house is opened in short order. Three women step forth. One wears a long black dress, a starched and snowy apron pinned to the front; her hair is ash-coloured and pulled back into a thick bun. The other two women move in a stately fashion, ladies these, sedate, precise in their dress, fastidious in their person.

Serafine, too impatient to wait for the coachman, throws back the carriage door; she, Adia and Veronica exit eagerly. I pause a moment to collect my battered satchel, hang it across my chest; it puckers my shirt, adds more creases as if they were needed. I pause on the metal footplate to take everything in. There is a manicured lawn, with a contradictory wild garden ranging across it, then a larger park beyond and the forest beyond that. A little thatched cottage, almost completely obscured by shrubs and vines, hides in one corner, a stable not far from it, and the garden beds are filled with flowers and herbs. A body of water shimmers to the left â more than a pond, but barely a lake â with ducks and geese and elegant swans seemingly painted on its surface.

âWelcome, welcome, Serafine, Adia, Veronica and Mercia,â says one of the Misses, either Fidelma or Orla. I climb down and take my place in line with St Dymphnaâs newest crop, examining my teachers while I wait for their warm gazes to reach me. Both are dressed in finery not usually associated with school mistresses â the one in a dress of cloth of gold, the other in a frock of silver and emerald brocade â both wearing heavy gold-set baroque pearl earrings, and with great long loops of rough-cut gems twisted several times about their necks. Then again, were they ordinary school mistresses our families would not have gone to such lengths to enrol us here for a yearâs special instruction.

âWelcome, one and all,â says the other sister, her heavy-lids sweep great thick lashes down to caress her cheek and then lift like a wing, as a smile blossoms, exposing pearly teeth. In her late forties, Iâd say, but well-preserved as is her twin: of the same birthing, but not identical, not the same. As they move closer, strolling along the line weâve formed … ah, yes. She who spoke first is Orla, her left eye blue, the right citrine-bright. Neither short nor tall, both have trim figures, and both have peach-perfect complexions, but I can see up close that their maquillage is thick, finely porous, a porcelain shell; the cheeks lightly dusted with pink, the lashes supplemented with kohl and crushed malachite, mouths embellished with a wet-looking red wax. I think if either face were given a swift sharp tap, the masque might fracture and I would see what lies beneath.

This entry was posted in fairy tales, News, On Writing: General and tagged St Dymphna's School for Poison Girls, the bitterwood bible and other recountings. Bookmark the permalink.