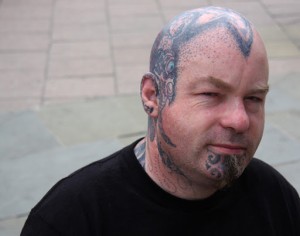 It seemed only fitting to hear from Spectral’s fearless leader once again: the delightful Mr Simon Marshall-Jones!

What inspired you to run with a second Spectral Book of Horror Stories?

That one’s simple really – the first one was such an outstanding success, both in terms of sales and critical appraisal, that there was no question of publishing a follow up. Mark’s a great editor, with a keen eye for story, so it was as simple as “Shall we do a second one?” “Yes!”

What can readers expect from this 2nd outing ?

Some old favourites will return, joined by writers both well-established and those yet to reach a broader audience. And we are joined by a writer better known for his YA fiction, Cliff McNish, with his first published adult fiction short.

Spectral Press is certainly spreading its wings – how many imprints are you running now?

Currently I am running three: Spectral, which concentrates on the horror/ghost/supernatural side of the genre (yes, yes, I know – neither of Stephen Volk’s novellas deal with the supernatural…): Theatrum Mundi, which deals with contemporary fantasy, slipstream, magical realism, and experimental works; and, lastly, rEvolution SF, the science fiction imprint, which will debut its first novel in 2016 with MappalujoÂ by Jeff Noon and Steve Beard. Also on the horizon is a crime imprint, Spectral Stiletto, the name harking back to the Golden Age of crime writing in the forties and fifties – stiletto knives and femmes fatale in stiletto heels.

What draws you to speculative fiction?

The possibilities, the breadth of the canvasses upon which the writer sketches out his visions, and sheer heights of imagination to which some authors fly. Speculative fiction stretches from the firmly mundane realities of the dystopian to the hyper-reality of imagined universes, dimensions, and realities. But, the wonder of it all is purely down to one element: that lump of grey matter nestled inside our heads that can go places where no physical human ever can.

The future of Spectral is…

I have no idea – but that’s the most exciting aspect of it all…. =)