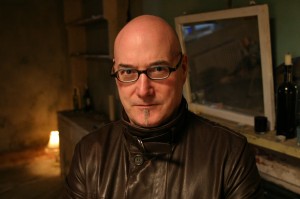 Stephen Volk is the author of the superb novellas, Whitstable and Leytontone, as well as a screenwriter of note, having written Ghostwatch, Afterlife, and Gothic. He’s won BAFTAs and British Fantasy Awards and is generally delightful.

What inspired your story “Wrong”?

I donât want to give too much away, because I donât want the reader to know whatâs coming, but it was directly inspired by something that happened in my home town a few years ago. The way prurient gossip surrounds this kind of thing, and the attendant moral outrage, made me think it was the core of an unusual story, but I didnât know how to tell it until I combined it with my memories of student life. The two things seemed to gel and make it work, I hope.

Possibly âEnochâ by Robert Bloch, because it was the first story in the paperback tie-in to the Amicus film Torture Garden. I remember the thrill of realising it took me inside the mind of somebody mad. It was the first paperback I bought with my pocket money instead of comics and it felt like forbidden fruit.

Tomorrow it might be three different ones, but today itâs Richard Matheson, Mark Morris and (unfashionably) Dennis Wheatley.

Iâve written stories that are crime (arguably my novellas Whitstable and Leytonstone) and science fiction/fantasy screenplays such as adaptations of The Box of Delights and The Chrysalids but Iâm most at home in the supernatural and psychological. But I go where the story takes me. I donât really think when Iâm writing a story that it has to be âhorrorâ â Mark said this story, âWrongâ, for instance âwasnât really horror but was horrorâ: which I take as a great compliment! My wife doesnât think I write horror, as a matter of fact, but thatâs to do with her definition. Iâm happy to be called a horror writer because it is the glove that fits me best, but happy to be just called a writer too.

John Connollyâs Nocturnes, Mark Morrisâs The Wolves of London, Marion Coutsâs The Iceberg, Sarah Pinboroughâs The Death House, and The Shining: Studies in the Horror Film edited by Danel Olson. Whatâs at the top of the pile always shifts around depending what Iâve just read and what I fancy reading next.