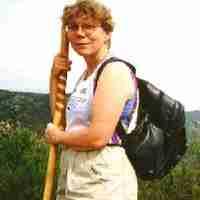 Barbara Hambly writes across fantasy, science fiction and historical fiction. She has an MA in Medieval History. Her world-building capabilities are enviable and to call her prolific is to understate things just a little. Her series, to date, are: The Windrose Chronicles, The Darwath Trilogy, the Sun Wolf and Starhawk series, the Sun-Cross series, the Benjamin January Mysteries, James Asher/Vampire Series, the Winterlands series, the Raven Sisters series, and the Beauty and the Beast books.

Not only that, sheâs written books in the Star Wars and Star Trek universes. She won a Locus Award for Best Horror Novel for Those Who Hunt the Night (Immortal Blood in the UK – one of my personal favourites and my introduction to her work), and its sequel, Travelling with the Dead won the Â Lord Ruthven award for fiction. Go forth and find her work for she is a true legend. Below, she kindly answers my random questions.

1. If I wasn’t a writer, I would…
… be considerably wealthier than I am now.

2.What was the inspiration for Immortal Blood?
Funny you should ask about that one; it was one of those rare, drop-out-of-the-sky-in-one-piece ideas that came to me – whole – while I was lying on the couch in the house of my then-sweetheart, just before leaving for Seattle for a convention. “Hey, how about writing a book about… etc.” One of the few times that’s happened.

3. Whatâs the best writing advice youâve ever been given? The worst?
It’s hard to say – I’ve had so much wonderful advice over the years. Worst? When I let Lester Del Rey, my editor, bully me into splitting the novel Sun Cross into two books and push me into making it much more a fantasy than the occult thriller I’d originally intended. I’ve always regretted that.

4. Which of your books gave you the most trouble, start to finish?
Dragonsbane. And Homeland. Both had to be re-written multiple times – re-thought, re-worked, re-imaged.

5. Donuts or danishes?
Actually, since I don’t thrive well on flour in any form, I stick with grapes. 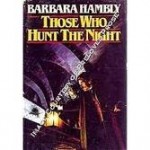 This entry was posted in Drive-by Interviews, News, On Publishing, On Writing: General and tagged and the Beauty and the Beast books, barbara hambly, Dragonsbane., drive-by interview, Homeland, James Asher/Vampire Series, Locus Award for Best Horror Novel, Lord Ruthven award for fiction, star trek, the Benjamin January Mysteries, The Darwath Trilogy, the Raven Sisters series, the Star Wars, the Sun Wolf and Starhawk series, the Sun-Cross series, The Windrose Chronicles, the Winterlands series, Those Who Hunt the Night, Travelling with the Dead. Bookmark the permalink.