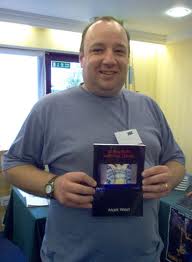 Mark West is a nice man (which seems to run in the British horror scene â interestingly enough). His titles include In The Rain With The Dead (from Pendragon Press), Strange Tales (Rainfall Books), Conjure (again with Rainfall Books) and ill at ease (PenMan Press). His novelette âThe Millâ in the British Fantasy Society Award-nominated We Fade to Grey garnered much attention and praise. Markâs writing is skilful and creepy. He is a member of the British Fantasy Society, The Terror Scribes and The Underside Community and he likes doughnuts but only by the seaside.

In The Rain With The Dead and âThe Millâ are soon to appear in ebook editions.

1. If I didnât write, I wouldâ¦
I have absolutely no idea, Iâve been writing since I was eight, so itâs part of me now really and I canât imagine it not being there.Â  I might do a bit of design, I imagine Iâd day-dream a lot and probably drive my wife nuts – no, thatâs now, isnât it?

2. The inspiration for âill at easeâ wasâ¦
Several different things, actually.Â  Iâm very much a paper-and-ink man, myself, because I love the tactile nature of books, I love the smell of them, I love having bookshelves full of them.Â  When Kindle started up, there were suddenly hundreds – if not thousands – of titles, with poorly designed covers and badly written, grammatically incorrect synopsisâ and terrible cover art and it just struck me that this might be another blow for the horror genre (since itâs such an easy genre to write in, of course!).Â  I wanted to do something to prove that itâs not all rubbish and I was talking with Steve Bacon at the time and we discussed setting up a project together.Â  We recruited Neil Williams, whoâd been in a writing group with us and took it from there, making sure the stories were tightly edited, that the cover had a good design and that we took care of making as professional project as we possibly could.Â  Itâs the first time Iâve ever been that involved in a project, literally from first idea to posting reviews about it on the Facebook page and I loved it.

Failing that, 1986, the year I left school.Â  I chickened out of pursuing two girls that year, so Iâd like to go back and give the 17-year-old me a slap and tell him to get on with it!

4. The biggest influences on me as a writer are …
Iâve always liked reading, but it was Peter Haining and his ghostly anthologies for kids (specifically âThe Restless Bonesâ) and the Alfred Hitchcock And The Three Investigators series, that got me into the spooky stuff.Â  Stephen King was a major influence, obviously and so was Clive Barker, especially since he was writing about an England I recognised, with people who were like me.Â  Over the years, thereâve been a lot of good writers that have shaped the way I see and do certain things and, hopefully, Iâm still learning and picking up tips from people.

5. Doughnuts or danishes?
Doughnuts, though I only really like them when Iâm at the seaside.

This entry was posted in Drive-by Interviews, News, On Publishing, On Writing: General, On Writing: Short Stories, On Writing: The Novel and tagged alfred hitchcock, clive barker, conjure, ill at ease, in the rain with the dead, mark west, Peter Haining, stephen king, strange tales, the mill, we fade to grey. Bookmark the permalink.

3 Responses to The Ill at Ease Drive-by: Mark West