Why do the voices in my head never tell me to go to Paris? 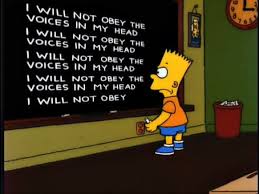 It’s unfair, really. As a writer, there are a lot of voices in my head – fortunately for you all, I channel their suggestions into my writing. Otherwise: man, we’d all be in trouble.

I started a story last night, which is provisionally entitled either “Feast” or “Lemarchandâs Dictionary of Tenuous Connections” … neither title might make it to the final cut. It’s the first story in a long while that I’ve written ‘from the air’ as it were – it isn’t part of a cycle of stories or a collection, it wasn’t commissioned. It’s the result of having had a particularly nasty character wandering around in my head for several months, refusing to tell me what he was doing there and what he wanted from me.

Sweet Bobby Tate is his name and he’s been poking his head above the parapet every so often, making unpleasant comments, suggesting scenes and descriptions that don’t fit anywhere but in a horror story. And I couldn’t evict him onto the page until other things fell into place, like the setting, the time, the context, and the voice of the other character he needed to play off – that’s Annabel Adams, by the way.

Last night all those pieces that have been floating around in my head and on scraps of paper and randomly scribbled post-it – they all converged. That’s when the shouting started and that’s when the story was ready to be told. It’s short – just under 4000 words – but it wrote itself very quickly – I just put the finishing touches on this evening – and I think it works.

It was a weird kind of experience because I’ve been writing longer and longer stories this year – cracking 15,000 words has become a frighteningly frequent occurrence – and writing them over a few weeks. To have one come so fully formed all at the one time (I tell myself, conveniently ignoring the months of having Bobby’s random tenancy in my head) is a forgotten experience. And a refreshing one: cathartic and reassuring to know that I can produce at speed something that I like and does not resemble word-vomit.

Now all it needs it a good flense and for me to find it a good home.

This entry was posted in On Writing: General, On Writing: Short Stories and tagged Lemarchandâs Dictionary of Tenuous Connections, short stories, writing. Bookmark the permalink.

2 Responses to Why do the voices in my head never tell me to go to Paris?