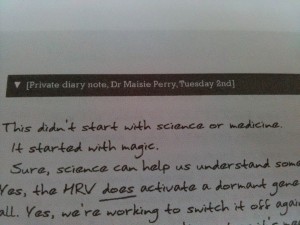 As a break from writing the novella, The Witch’s Scale, I went over the page proofs for my story in the last installment of the Zombie Apocalypse anthologies from Mr Stephen Jones, ZOMBIE APOCALYPSE: ENDGAME!

I’ve used “Red Dust, White Earth” as a chance to pay a little tribute to my maternal grandma by using her name for my main character. Possibly not as exciting for my mother to see her mother immortalised in a zombie story, but as my sister said “Hey, you made her a doctor!”

Human Reanimation Virus (HRV) has spread around the globe and most of the major cities have fallen or been destroyed. As a new race of intelligent zombies rise to power, the remaining pockets of human resistance make a last, desperate stand in the ruins of a world on the brink of unimaginable change.

With the final pieces of the epic puzzle falling into place, a centuries-old Endgame is revealed through a series of interconnected documents â emails, articles, reports,
diaries and eyewitness accounts â as past and future hang in the balance.

In this third and final volume of the original best-selling Zombie Apocalypse! trilogy, Thomas Morebyâs plan for world domination is finally revealed in all its mad glory, as the very fabric of time and space is ripped apart and history itself is about to be changed forever . . .