A repost – unlike refried beans 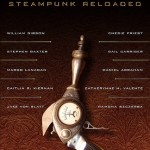 From Crackpot Palace,Â a repost:

The inimitable Jeffrey Ford advises thatÂ that Steampunk II: Steampunk Reloaded is out and about.

Steampunk Reloaded,Â an anthology edited by Jeff and Ann VanderMeer,Â from Tachyon, is reportedly out in book stores.Â  It contains my story about a steam plague, “Dr. Lash Remembers,” which is mischeviously meddled withÂ by Angela Slatter and LisaÂ Hannett.Â Â Â

Surely if this becomes a movie it must be called Steampunk II: The Compendium?