And Then interviews: James Hopwood 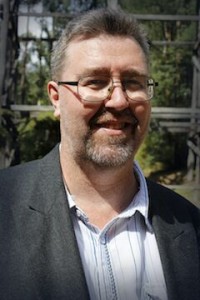 Author James Hopwood (aka David Foster) talks about his tale, “The Lost Loot of Lima”.

Even for fiction projects, I always like to start off with something real. I like readers to think, even if it is for only a second, that the story they are reading could happen in real life â in their world. In this instance, I discovered an old photo of a tourist sign that once stood in the coastal township of Queenscliff, Victoria. The sign suggested in 1821, feared pirate, Benito ‘The Bloody Sword’ Bonito, buried a portion of his treasure â the famous Loot of Lima â in a cave on the shore of Swan Bay â where Queenscliff now stands. The cave entrance was dynamited, and Bonito sailed out of Port Philip Bay, only to be set upon by a British Man-O-War. Bonito and his crew were captured and executed… and the treasure remains hidden to this day.

As I continued my research into the Loot of Lima and Bonito, more and more astonishing material came to light. But most importantly, it provided a great starting point for my story ‘The Lost Loot of Lima’.

Quite simply the opportunity to write Australian content for an Australian publisher. Over the last few years I have written many high-adventure stories â mainly for the American market. I’ve tackled foreign legionnaires, mad-dog cowboys, spies â both British and American, costumed superheroes, warrior women on a frozen tundra, and displaced Americans in far-flung places â but rarely do I get to write about my own back yard. It’s nice to bring my imagination back home.

I am probably not the best person to ask. I am extremely biased. As a New Pulp writer most of my work is around 10,000 to 30,000 words. It’s figuratively where I live as a writer, so I am a strong advocate for short stories and novellas. I love stories that are stripped of bloat and fluff. I appreciate some stories need a longer treatment, and that’s fine, but I also see some 400 to 600 page monsters and can’t help but think they would be better served stripped down to 180 pages. Get to the point. Give the readers what they want, and get out fast!

Very strong indeed. E-Books and E-Readers have made short stories viable once again. Not so long ago, short stories could only exist in anthologies. And hey, thatâs great too â I mean, thatâs where I got my start, but now thereâs an opportunity to release single stories or even a series of shorts at an affordable price. Readers can now follow a series, or a character and be updated with regular instalments. It’s an exciting time in publishing. Itâs great for writers, and great for readers.

Mmmm [scratches chin]. There’s so much on the verge of being released, it’s a little bit frightening. The Legends of New Pulp Anthology is just around the corner from Airship 27. I have finished edits on my next retro-spy thriller The Ambrosia Kill, which should be out early next year from Pro Se Productions. January and February (touch wood) will see two new instalments in the Vengeance Single Shot series. And there’s a few other projects I am not at liberty to discuss yet, but it’s all good. 2016 is shaping up to be exciting year.

James Hopwood is the pen name of action adventure writer David J. Foster. He is the author of the retro-spy thrillers, The Librio Defection,Â The Danakil Deception, and The Ambrosia Kill (coming soon). His short fiction has been published by Sempre Vigil Press, Crime Factory, Airship 27, and Pro Se Productions.

Writing as Jack Tunney, he also scribed King of the Outback,Â Rumble in the Jungle,Â and The Iron Fists of Ned Kelly, books in the popular Fight Card series.

You can find out more at his website http://permissiontokill.com/

This entry was posted in News and tagged And Then, David Foster, James Hopwood. Bookmark the permalink.