And Then interviews: Kerry Greenwood and David Greagg

One last, almost lost but now found And Then! interview with Kerry Greenwood and David Greagg about their tale “Cruel Sister”. 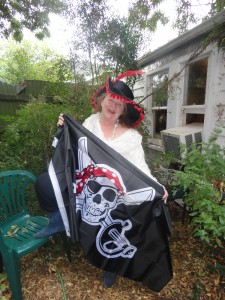 We share a long-standing SF and fantasy habit and it seemed like a wonderful opportunity to combine the two. Putting traditional fantasy themes (shape-changing, sibling rivalry, human/animal companionship, quests and so forth) into space seemed like a natural thing to do. So we did it. We have invented some new SF ideas, but we did not want them to overwhelm the story, so they are backgrounded. We also decided that in deep space, people would revert more strongly towards their cultural roots as a reaction against the agoraphobia which would otherwise overwhelm humans genetically programmed to share a small planet circling an unregarded sun.

TheÂ format we were given – an adventure story with two equal participants â struck us as at once timeless and contemporary. So we decided we needed a fairy tale, and the format proved to be ideal. 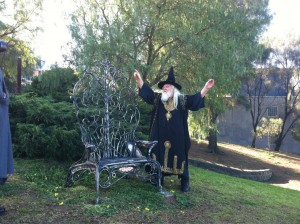 It is short enough to demand economy in painting scenes, while long enough to escape the constraints of enforced miniaturization. A short story can only be a cameo. Long-short gives you the opportunity for a polyptych.

Promising, especially with e-books. Short fiction is ideally suited for commuter travel where most people have devices. It is also ideal for holidays (to fill in the gap between beach and dinner), and bed-time. We have all ruined a good nightâs sleep by not being able to put a full-length book down. A gripping short story is perfect for after you have switched off your machines, bedded down your children and furry animals and need to avoid thinking about the challenges that the morrow will bring. Switch off everything and take out a book! Nothing that hits your screen after 10pm is worth the bother. It can wait. Feed your dreams with fiction instead.

Kerry Greenwood and David Greagg are a gestalt entity who read each otherâs minds and cover each otherâs linguistic and musical omissions. She does romance languages while he does Germanic and weird tongues. And she sings soprano so he doesnât have to. She costumes and makes stuff, while he wears armour and hits people with sticks. They were raised in the forest by benevolent wood-elves and are co-curators of a Found Catsâ Home. They both write, and finish each otherâs sentences.

This entry was posted in News and tagged And Then anthology, David Greagg, Kerry Greenwood, Phryne Fisher Clan Destine Press. Bookmark the permalink.

2 Responses to And Then interviews: Kerry Greenwood and David Greagg