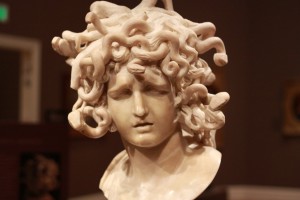 So this morning I’m starting what will be a periodic series called Bad Women. Basically I’ve asked some of my favourite writers and editors to write a paragraph or two on their favourite “bad” women in the fiction universe, be it literature, film, tv, graphic novels, legend, myth, fairy or folk tale, art, as long as they’re fictional. The definition of “bad” is pretty broad, whether these characters are badass or perceived as traditionally “bad”. I wanted to have a look at how people perceive the idea of bad-osity.

And so without further ado, I give you the wonderful Paula Guran on Medusa:

In brief (and overly simplified): We all know Medusa was a horribly ugly monster with snakes for hair; her gaze turned men to stone. Right? But she didnât start out that way. She was once a beautiful maiden with a glorious head of hair who was a priestess of Athena, pledged to celibacy. Poseidon, the sea god, was so taken with her he raped her in the temple of Athena. Youâd think Athena would have taken pity on her, but no, the goddess is the one who turned her into a monsterâhow dare the girl defile her temple! Later, the hero Perseusâthanks to a mirror-like shield gifted to him by, right, Athenaâavoids Medusaâs gaze by looking at her reflection in the shield can cuts off Medusaâs head. Turns out, she was pregnant by Poseidon and when beheaded Pegasus, a winged horse, and Chrysaor (either a giant with a golden sword or possibly a winged boar) are born. After using Medusaâs head to kill some folks, Perseus returns Athenaâs shield and gives her the head. Medusaâs head winds up on Athenaâs shield.