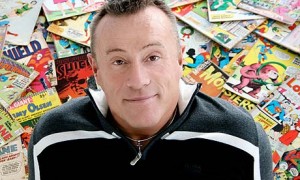 Photo snurched from The Guardian

Please welcome Mr Christopher Fowler, he of (among MANY other things) the Bryant & May books, to chat about “The Tinder Box”, transgressions, Quasimodo, and the effect you want to have as a writer.

âONCE UPON A TIME in a far-off land there was a rich merchant who had two children, a boy and a girl born a year apart. The boy was called Peter and the girl was called Elizabeth. Their lives were happy, and they were as close as brother and sister could be. But a terrible sickness swept through the region and touched nearly every family. Elizabeth lost her mother and her beloved brother, and watched in the town square as their bodies were burned, for it was the only sure way of stopping the plague from spreading. Then, with the smell of her loved ones cinders still in her clothes, she returned home to tend to her grief-stricken father.

that made the biggest impression on you?
I remember vivid individual scenes more than a single fairytale – the dog with eyes as big as windmills from ‘The Tinder Box’, the flight after midnight from ‘Cinderella’, but more curiously, Rosamunde dragged into the sinister forest by imps in the creepily nationalistic (and once hugely popular) ‘Where The Rainbow Ends’, which still bothers me, and Uncle Two-Heads slowly sinking into the quicksand from ‘Tiny Tim In Giantland.’ The true stuff of nightmares.

2. Is there a natural link, do you think, between fairy tales and horror?
Entirely – there’s a moralistic tone to both; transgress, break the rules and you’ll be punished without mercy, a code of practice we’re meant to understand and follow. Religion, of course, works on a similar set ofÂ strictÂ guilt-inducing rules.Â

3. Does your work usually play with fairy tale elements or is this a first for you?
I’ve certainly mined the seam before in various collections of short fiction over the years, but never quite so overtly as in this instance. It’s very liberating, being as cruel as you like and knowing that if you stay within the accepted code of the fairytale you can do whatever you like!

4. What do you think the fairy tale form offers to writers and readers?
It certainly frees you from political correctness. It’s also a chance for readers to sympathise and understand your characters without much work on your behalf; I was sitting in a screening of one version of ‘The Hunchback of Notre Dame’, and in the scene where Quasimodo thinks Esmerelda has died, a child behind me said; ‘He’ll cry and his tears will fall into her eyes and bring her back to life.’ That’s the effect you want to have.

5. What is your favourite fairy tale trope/motif/element/character withÂ

which to work?
All writers love rules, and if they tell you they don’t they’re liars. So – the rather random rules you must not break, or face dire consequences – ‘Be back before midnight.’ Also, extreme patrician moral judgementalism – ‘The ugly sisters were jealous and vain so birds flew down and pecked out their eyes.’ And finally, the kind of non-sequiturs that make the land of fairytales so utterly alien to us – ‘The princess was wilful and wild-spirited, so the Queen locked her in a turret.’ Also, castles are fabulous (see my stories: ‘Tales of Britannica Castle’).