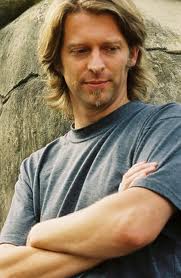 Paul Haines is a survivor of the first Clarion South; this accords him legendary status, a free tankard of mead from every inn he walks into, and the right to an annual tribute of a fine piglet. He is the author of the award-winning collections Slice of Life and Doorways For The Dispossessed (cool title). He also contributed to Coeur de Lionâs collection of novellas, X6. In 2011 four of his stories have been shortlisted for the Sir Julius Vogel awards: âI’ve Seen The Manâ and âHigh Tide At Hot Water Beachâ for Best Short Story; âHer Gallant Needsâ and âA Tale Of The Interferers: Hunger For Forbidden Fleshâ for Best Novella/Novelette.

His newest collection is The Last Days of Kali Yuga and it is available from a variety of sources with excellent taste, including Amazon, Amazon UK and Smashwords. Below, he talks about scaring his mum and the horror potential of donuts over danishes.

1. Who was the first person you scared with your writing?
I’m guessing it was probably my mother. I wrote a very pornographic comic when I was about 13. It depicted, among many things, some graphic bestiality and incest. My friends and I thought it was a hoot. I remember the day my mother discovered my secret comic book. I was sitting at school (3rd form) and I suddenly had this horrible feeling rush over me and I knew my mother had found something. I spent the rest of the day dreading going home and then when I got home, well…

And many years later I started writing fiction, and, um, a couple of those themes reappeared, as well as a fictional mother of the fictional Paul Haines in the Slice of Life short stories.

My poor, poor mother. She knows that I love her and that I am a good person at heart, but she doesn’t pass on my writing to many of my extended family members.

2. When you started writing seriously, was there someone whose style – or success – you wanted to emulate?
I wanted that easy-to-read voice of Stephen King (my first favourite author when I was 13) but I also wanted that hardness employed by George RR Martin in fantasy. Because, you know, I was going to write every form of the genre. That was more style though. Success? I just wanted to get a short story published.

3. What’s the secret to a really good horror story?
Make it as real as possible, otherwise you won’t scare yourself, let alone anybody else.

5. Donuts or danishes – and which has the greatest potential for horror?
Donuts. The Simpsons have done some pretty good Treehouse of Horror stuff with donuts. They have a hole in them! Holes can cause so many problems.

His site, she is here.

This entry was posted in Drive-by Interviews, News, On Writing: General and tagged coeur de lion, Paul Haines, Sir Julius Vogel awards, Slice of Life and Doorways For The Dispossessed, the last days of kali yuga, X6. Bookmark the permalink.