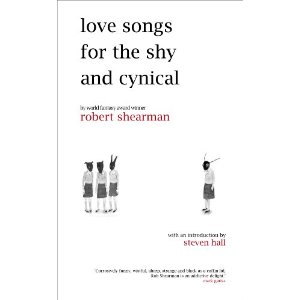 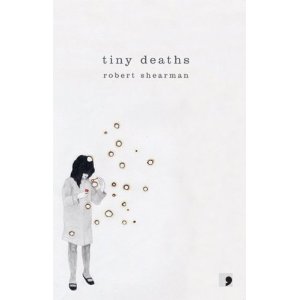 Robert Shearman is a nice man. Heâs also an amazing writer â allow me to quote fromÂ a review of his first collection, Tiny Deaths, âThe dialogue is witty and wise, the settings believable, and the charactersâ¦ well, they’re all people you know, even the multiple Jesuses (what is the plural of Jesus?). The humour is dark but never nasty. These stories display their brilliance in ways both sly and shy, as if lifting their skirts to show off their knickers and then acting as though nothing happened.â Okay, admittedly I wrote that review, but the fact remains thatÂ the bookÂ won a World Fantasy Award. He has also written for stage and television – including Dr Who. Dalek showed us how daleks evolved to conquer their greatest enemy, the stairs.

Now Love Songs for the Shy and Cynical, his second collection is currently stuffing its swag full of awards: the Shirley Jackson and the Readersâ Award in the Edge Hill University Short Story Competition, thus far. He is coming to Australia for AussieCon4. Go and meet him, buy him a drink.

Â Here he takes time out from his very busy writing schedule to answer my silly’ish questions:

Now Love Songs for the Shy and Cynical, his second collection is currently stuffing its swag full of awards: the Shirley Jackson and the Readersâ Award in the Edge Hill University Short Story Competition. He is coming to Australia for AussieCon4. Go and meet him.

And over the years, as I’ve grown older and less tolerant of myself and my stupidities, I’ve been weening myself off them. Writing outside at three in the morning was fine when I lived in Devon with nothing but sheep for company and very lenient policemen; it’s less sensible now I live in London and I share the early morning streets with prostitutes and gangland warfare and – bizarre, but true – hordes of twelve year old children who try to scare me by riding bicycles at me. So I still write outside – but I do it in the *day*time, and now only so I can get away from the twin distractions of Facebook scrabble and television game shows. I still listen to music, but they’ve invented a thing called an ipod now, so it can be any old nonsense on shuffle… so long as it’s ambient and dull. (I’ve bought an awful lot of very dull albums over the years, which would be *achingly* awful were I not wanting to write to them.) And I still use the same exercise books – but only because I accidentally bought a joblot of eighty of them a few years ago when I thought I was only ordering half a dozen… and I have a lifetime to get through them.

2. When I was first asked to write for Dr Who, I …
…was on a bus in London. And it’s against the rules of London buses to dance up and down the aisles – they say it distracts the driver. So I was obliged to sit squarely in my seat and wait until the bus came to a complete halt before I could get up and do the dance thing.

I’d been a huge Doctor Who fan when I was a kid – really, genuinely obsessive about it between the ages of twelve and fifteen, the sort who could recite every single story title in order. (Actually, I still can.) And the affection for it never went away. The original BBC series was cancelled in 1989, and although I was at university by then, and was just a little too old to love it in the same way I once had, it caused me genuine distress that it was no longer on the air for the next fifteen years. It just seemed *wrong* in the scheme of things. So when the BBC announced the series was to be revived, way back at the end of 2003, I was over the moon. When my agent phoned me up a couple of weeks later, on that London bus, I was rather higher than the moon and somewhere in the vicinity of Pluto.

The irony was that I was with a new agent, and someone who had no idea of my Doctor Who geekery. And someone, too, that I had told rather stiffly I had no interest in working on anyone else’s television series – from now on, I’d said, I’d only write self-created work. So when she phoned to tell me an offer had been made, and that I was to bring back something called… what was it they’d said, Daleks? – I jumped on her right there and then to ignore all I’d instructed her and to accept. (I think she might already have done so. Every good agent knows to ignore me most of the time.)

3. The worst thing that’s ever happened to me at a con/reading was …
Conventions are a bit awkward and embarrassing if you’re there as a very minor guest, and no one has the faintest clue who you are. If I go to a Doctor Who convention, I’m treated (rather wonderfully) like minor royalty. Doctor Who fans are terribly loyal. They give you free beer, and free pastries, and free head massages. But if it’s a *general* sci-fi convention, and I’m only there to represent the Doctor Who contingent because I’m incredibly cheap – if I’m surrounded by lots of actors from American shows, and I’m just a *writer* from something made in *Wales* – then I can feel a bit like a village vicar in a room with the Pope.

I was at a con in Toronto once where that was most acutely obvious. I was in the green room, walking about helping myself to nibbles, in the company of several Star Trek actors, guest stars from The X-Files, and that lady who was in Babylon 5 who was also in Lost. (My God, was she grumpy.) I think they all thought I was some crazed fan greedy for snack food. I then had to appear on a live television show alongside George Takei. George Takei was a charming man who spoke about the great innovations of Gene Rodenberry, and how all the fictional gadgets he’d come up with like the communicator had been so prophetic. I was then asked by the interviewer whether Doctor Who was similarly advanced, whether that too would inspire the great inventors of the future. Whether the TARDIS could be something that’d be the blueprint to a whole new technology our children might enjoy. “Nah,” I said. “It’s a load of old bollocks, really, isn’t it?”

But now I just find the idea that I’m a writer terribly funny. I became a full time writer when I was 22. I was very lucky. I’m now 40. I realise I’ve spent 18 years for someone to tap me on the shoulder and tell me it was all a mistake, or a very odd joke – that I’m not allowed to do this job after all, that I have instead to go and do something that involves cash registers or heavy lifting. It’s bound to happen one day. My shoulder is ever waiting. But until my shoulder is tapped, I’m determined just to enjoy the whole thing – deadlines, editing, self-doubt and all!

5. Donuts (or doughnuts) or danishes?
Hmm. Doughnuts. I like toying with the hole in the middle, and pretending its calorific content extends to the entire ring around it.

6 Responses to Drive-by: Robert Shearman, father of the intergalactic dustbin