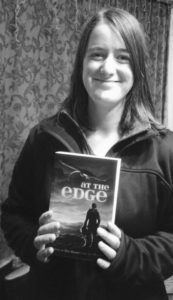 E.G. Wilson cut her authorial teeth writing Sherlock fanfiction at uni whenÂ she should really have been studying. She fell into writing science fiction after being inspired byÂ Star Wars, Firefly, and Tolkien’s Legendarium, and has since won NaNoWriMoÂ every year since 2012. She lives in South Canterbury, New Zealand; she lovesÂ mountains, hates broad beans, and never wears matching socks. Today she talks about her At the Edge story “12-36”.

The longer answer is Firefly, and Terry Pratchett, and the fact that I am very much in love withÂ my tiny home country at the bottom of the world.

Truth is, I was in the middle of Camp NaNoWriMo when I saw the call for submissions. SirÂ Pterry had passed away only a week or two beforehand, and the news was fresh in my mind. IÂ put my WIP on hold and wroteÂ 12-36Â in two days, and then went back and finished the WIP.Â Guess itâs true what they say: a writer in motion will stay in motion unless they have to go toÂ their day job.

Many of the elements evolved naturally as I wrote it, but the core three remained. For FireflyÂ there was Tsione, who spoke a Firefly-influenced dialect and could hold her own againstÂ Captain Malcolm Reynolds any day. For New Zealand: Rerenga, barefoot and brown-skinned,Â innocent as a sunrise over the Pacific and wild as a rainstorm in the Catlins. And for the lateÂ Sir Terry Pratchett: Port Pratchett, a certain Scots phrase, and at least one tautologous simile.

Two main things:Â the fact that it was a collaboration ofÂ New Zealand (and Australian)Â speculative fiction authors, and the chance to earn some money from my writing, which wouldÂ shut the naysayers up for at least five minutes.

And of course the chance to work with Lee and Dan.

4. Can you remember the first thing you ever read that made you want toÂ write?

I canât. But the thing that will always and forever make me fall in love with writing all over againÂ is Tolkienâs Legendarium. I read The Hobbit as a child; graduated to The Lord Of The Rings asÂ a teenager (I have to admit, the Jackson movies helped there); and I appreciate TheÂ Silmarillion so much more as an adult. The Professorâs command of language isÂ masterful.

It gives me such hope as an author to know that even one of the literary greats likeÂ Tolkien can beÂ surprised by his characters. As he put it in a letter to his son Christopher,Â âAÂ new characterÂ hasÂ come on the scene (I am sure I did not invent him, I did not even want him,Â thoughÂ I like him,Â but there he cameÂ walking into the woods ofÂ Ithilien):Â Faramir, the brother ofÂ Boromir.â (LetterÂ 66, 6th May 1944).

Among other drafts and manuscripts, Iâve written a science fiction duology set in myÂ hometown of Timaru, or, to give it its Maori name which Iâve used in the books, TeÂ Maru. An American publisher is interested; I signed the contract this morning. The Kickstarter for the Voiceless DuologyÂ should be live in August or September sometime.