Happy Anniversary to Me 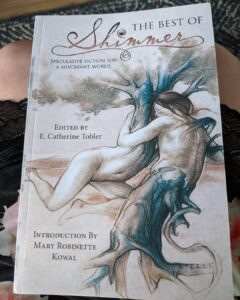 So I guess this arrival is timely as it reminds me that October is a sort of writing anniversary for me.

I’d moved back to Queensland after 4 years in Sydney, specifically to give writing a go as a serious career (read: eat 2-min noodles and live in a garret). I attended my first Brisbane Writers Festival just after, in Oct of 2003. Just before I set off on Day One (like literally 15 mins before I set foot out of the door), I received an email to say my flash fiction story “Hero of the Underworld” (I think that’s the title, it’s been a long time!) had been accepted by Antipodean SF. So I took it as a sign I was on the right path. Still here 16 years later, putting the finishing touches on my fourth novel, tenth collection, whateverth short story.

Still occasionally wondering if I made the right choice or if Fate is simply dropping breadcrumbs to lead me over a cliff at some point. But this is my happy place. Writing is the only thing that’s never made me feel unhappy at my core – it’s hard, yes, but it’s a joy.

But back to The Best of Shimmer – look at those names on the back. 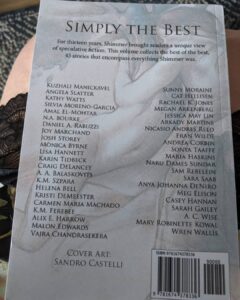 LookÂ  at them. This wondrous little magazine gave so many of us our start – and look at the powerhouses they’ve become. Loooooook.

Thank you, Shimmer (Beth Wodzinski, Mary Robinette Kowal, Lisa Mantchev, E. Catherine Tobler, Joy Marchand – I think I got all my first editors!), for giving me a run when I was a baby writer.