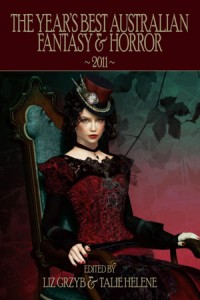 We’re home after a five week trip and this blog has been sorely neglected. A contrite series of catch-ups will be posted. Tomorrow, though, I must set aside my jetlag and related tendency to walk into walls and talk to shoes, and give some good advice to folk at the QWC event, So you want to be a writer. Chris Currie and Ben Law are also empanelled so there’s sure to be better advice than my slurry ‘I have a cat called Mittens’ standard.

Also, while I was away two of my stories have been selected for Ticonderoga’s next Year’s Best Australian Fantasy and Horror – huzzah! “The Coffin-maker’s Daughter”, which appeared in Stephen Jones’s A Book of Horrors and “The Hall of Lost Footsteps”, my co-written story from the final Sara Douglass collection of the same name, are on the list.

Also: most gorgeous cover ever.