HORROROLOGY: THE LEXICON OF FEAR 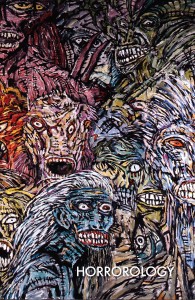 And here’s another secret I’ve been sitting on for ages, the new anthology from Stephen Jones and Jo Fletcher Books Horrorology: The Lexicon of Fear, with cover art and internals by Mr Clive Barker.

And yes, I’ve got a piece in it, a novella called “Ripper” of which I’m inordinately proud.

I’m also inordinately proud of sharing the ToC with these good folk:

Amongst the shelves in the Library of the Damned is a book that is the most terrible of them all: The Lexicon of Fear. Now reprinted for your pleasure – and horror – are some of the secrets contained within.

In the Library of the Damned, hidden away amongst that vast depository of ancient wisdom, there exists a certain bookcase where the most decadent, the most blasphemous of tomes sit upon a dusty shelf.

And amongst those titles – that should never be named – there is one volume that is the most terrible, the most hideous of them all. That book is the Lexicon of Fear.

But, long ago, some of its pages were ripped from the binding and spirited away by a lowly student of the ancient science of Horrorology, who was determined the secrets contained therein would one day be shared with the world.

And now that day has come. These are the words that comprise the very language of horror itself, and the tales they tell are not for the fainthearted. But be warned: once you have read them, there is no turning back. Soon, you too will know the true meanings of fear . . .