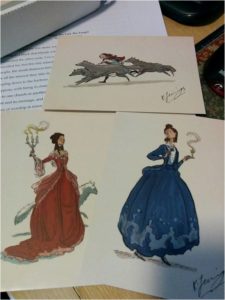 Artwork by Kathleen Jennings (as pretty much always)

So, in honour of the doors between worlds opening this eve, and all manner of things walking through, here is an older story of mine, “Words” (first published in The Lifted Brow # 5, June 2009). Enjoy!

She was a writer, once, before the words got out of hand.

She would read aloud what sheâd written that day, dropping sounds into the night, into the sometimes balmy, sometimes frosty air. After a while, she noticed that the words seemed to warm her no matter what the season.

Her voice became stronger, so soon she could read for longer. The sentences took on a life of their own, prancing and weaving themselves into the shapes of the things they described. She was always busy concentrating on those words that stayed obediently on the page, but one night, something caught her eye. A flowing diphthong movement, the graceful pivot of an elision as they wrapped themselves around each other and turned into a small, pale pink dragon, which then disappeared with a slight pop.

She knew, then, that sheâd become something other than a writer. The word âwordsmithâ had hidden itself away in protest against misuse about three hundred years ago and refused to come out. The word âwitchâ appeared but she ignored it, thinking it best.

Her house and the house next door were quite close â you could look out the window of one almost into the window of the other. Three children lived there, two little girls and a boy. They knew about the words before she did, had been watching nightly for some time. Their parents had been pleased â indeed so relieved as to not be pricked by suspicion â when they started going to bed at the prescribed hour without protest.

It gave the children time to brush their teeth, struggle into their pyjamas, get tucked in by their parents, and for George to sneak out of his room, across the hallway into his sistersâ and for them all to take their places on the edge of Sallyâs bed just before the writer settled down on the old green velvet couch in her living room. Rose would hand out the hard sweets, the fruity ones that could be sucked on for almost an hour before they dissolved into a sugary puddle in the mouth. Unless Sally crunched down on hers (which she frequently did); then, she would chew noisily on the friable shards and beg Rose for another, promising not to do it again.

It may have gone on for years, until the children grew sick of enchantment or the writer died or someone moved away. It might have gone on forever if it hadnât been for the wolf. The writer rewrote Little Red Riding Hood, which was Roseâs favourite story and the one that frightened Sally the most, so when the wolf swirled into being in the middle of the sitting room, grey and shaggy and rather larger than the word-creatures usually were, Sally screamed.

It still could have been okay had their parents not been walking past the bedroom. Their father flung open the door before the children had a chance to get away from the window, before George could duck under a bed, and before the word-wolf had time to dissipate with a half-hearted snarl.

The parents put their children to bed, all in Georgeâs room on the other side of the house. They held a discussion. They went next door and knocked.

âWe donât like what you do,â the father said.

âTell whom?â asked the writer. âAnd what would they do? Itâs a long time since the age of torches and pitchforks.â

The parents didnât think this was funny at all. The mother rang the Neighbourhood Watch chairman, Mrs Finnerty, who was also on a Committee for Moral Hygiene (though no one seemed to know what that was).

The mother told Mrs Finnerty what theyâd seen; she also said that the writer walked around naked a lot. Mrs Finnerty (whose husband had run away with a young nudist) found her doubts about the word-creatures overcome when she heard about the nakedness.

Letters began to arrive for the writer, insisting she desist. She read the first two; tore up the rest as soon as she drew them out of the letterbox, recognised the stiff, off-white envelopes, ripped them up right in her front yard so the whole neighbourhood could see. She threw the pieces into the air and even if it were a still day, a breeze would start up and carry the pieces of torn envelope and letter into the gardens of her neighbours. The ones that wafted to Mrs Finnertyâs always managed to land on her doormat and spell out rude words. In spite of herself, Mrs Finnerty started yelling some of those rude words back, coupling them with âwitchâ.

The writer kept reading out her stories, the word-creatures becoming more and more realistic, staying longer before the inevitable pop. She started concentrating on landscapes, too, and buildings, so small villages would spring up on the carpet in her living room, with tiny people wandering the cobbled streets, carts pulled by donkeys, vendors arguing with customers in the markets; and all making a tremendous noise for their size until they disappeared.

The police were called but they werenât sure what they could do. They (a fat sergeant and two thin young constables) spoke with the writer and she smiled and laughed and refused to stop. She wasnât disturbing the peace, she was in her own home, and as far as they were aware, there was no legislation against writing this way. To the disappointment of his companions, the sergeant reluctantly refused her offer of coffee and cake and went next door.

They watched from Sally and Roseâs bedroom window, with the neighbourhood parents and Mrs Finnerty all crowded in behind them. One of the young policemen found the discarded bag of candy under Sallyâs pillow (where Rose had stuffed it on that fateful night), surreptitiously put one in his mouth, and sucked at it.

As they watched, the clock clicked over to eight-thirty and a chime sounded, deep and sonorous. The writer came into her living room, gave the audience a small smile and shuffled the papers in her hands, rather like someone preparing to give a speech at a hostile debating society. She wore a long dress, green and flowing â the young policeman sucking on his sweet rather hoped it was a bathrobe that she would discard fairly soon – and her hair was caught up and covered by a scarf.

She turned her back to the window and began to murmur; this evening she did not use her clear readerâs voice to project the story, but the word-creatures came all the same. Fairies, dragons, wolves, striped sheep and tuxedoed bears, candy-covered trees, men made of tin and women of cloud, and finally, a door.

It was a perfectly normal door if a little ornate, dark-wooded and banded with iron engraved with stylised holly. It was stout and it stayed. The neighbours and police saw her reach for the handle and turn it. The door opened and they could all see hills, sky, apple trees, and a cottage with many windows, many rooms. The writer turned and smiled and as she did so they saw their children, twenty-seven in all from teenagers to babies, with Sally and Rose and George in the forefront.

The children waved to their parents and stepped through the door, one by one until only the writer remained. Parents screamed.

Soon, police and parents were battering at the writerâs house. She heard the windows break, the wood tear as men as angry as bears broke through the door. She saw the young policeman still sitting on the edge of Sallyâs bed, his mouth slightly open, the candy wet and just visible between his lips. She stepped through the door and closed it just as the first parent staggered into the room.

In their rage, they burned the house, but some nights you can see shades and shadows dance around the big tree in the yard. And the young policeman comes by sometimes, to sit beside the blackened ruins and watch in hope of a door.