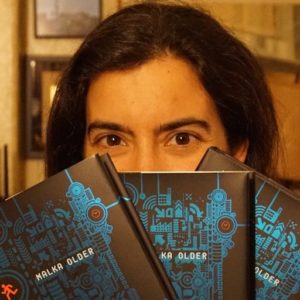 The formidable Malka Older took some time from her insanely busy schedule to chat with us about her amazing novel Infomocracy (among other things). Her bio is below – read it at your leisure and be in awe!

Malka Older is a writer, aid worker, and PhD candidate. Named Senior Fellow for Technology and Risk at the Carnegie Council for Ethics in International Affairs for 2015, she has more a decade of experience in humanitarian aid and development, ranging from field level experience as a Head of Office in Darfur to supporting global programs and agency-wide strategy as a disaster risk reduction technical specialist. In between she has designed and implemented economic development initiatives in post-disaster context; supervised a large and diverse portfolio as Director of Programs in Indonesia, and responded to complex emergencies and natural disasters in Sri Lanka, Uganda, Darfur, Indonesia, Japan, and Mali, in the last three as Team Leader.

Her doctoral work on the sociology of organizations at the Institut dâÃtudes Politques de Paris (Sciences Po) explores the dynamics of multi-level governance and disaster response using the cases of Hurricane Katrina and the Japan tsunami of 2011. As part of this work she has been selected as a visiting scholar at Columbia University, on an Alliance Grant, and at the Fletcher School of International Affairs at Tufts University. She has an undergraduate degree in literature from Harvard and a Masters in international relations and economics from the School of Advanced International Studies (SAIS) Johns Hopkins University.

Her research interests include intra-governmental relations in crises; the paradox of well-funded disaster responses; measurement and evaluation of disaster responses; and the effects of competition among actors in humanitarian aid (. She has also conducted research for the French Institut de Radioprotection et de SÃ»retÃ© NuclÃ©aire (IRSN) on the human and organizational factors involved in the Fukushima Dai-Ichi crisis.

Malka Olderâs writing can be found at Leveler, Tor.com, Bengal Lights, Sundog Lit, Capricious, Reservoir, Inkscrawl, in the poetry anthology My Cruel Invention, and in Chasing Misery, an anthology of writing by female aid workers. Her science fiction political thriller Infomocracy is the first full-length novel from Tor.com, and the sequel Null States will be published in 2017.

1. First of all, what do new readers need to know about Malka Older?

I’ve always been a reader and a writer. I’ve also worked in humanitarian aid and international development, and I’m currently a PhD candidate studying the sociology of how governments respond to disasters.

2. What inspired your novel Infomocracy? 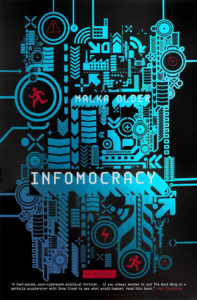 The general concept was inspired by two strands of frustration that I’d been chewing on for a while. The first has to do with outdated concepts of sovereignty and territory. I had lived or worked in a lot of countries with active secession movements: Sri Lanka, Sudan, Indonesia, Spain, Italy, which often led to violence. (In fact, almost every country has a secession movement of one kind or another). The flip side, of course, is the problem of ensuring adequate representation for minority groups in democracies.

The other frustration was around how political debates are becoming increasingly uncoupled from facts. I’ve seen this happen in a lot of places, but for me it came to a head particularly during the 2012 US presidential elections. I like having discussions with people who disagree with me politically, but it was becoming harder and harder to do because we couldn’t agree on basic premises of fact: who did what and what it meant, things that should have been provable one way or the other.

So I had those two issues bubbling, with some thoughts about potential ways to address them in a hypothetical future. Then came the trigger that gave me a location and a mood. I was working in Japan after the 2011 tsunami, and we had to drive an hour or more every day from where we were staying to the coast and back. Along the way on one of our routes was a kind of run-down, remote pachinko parlor called “21st Century” (????). I was struck by the image of enthusiasm and futurism around the 21st century back when this place was founded and named, and how poorly that had fared with the inevitable passing of time. That image helped me push the story into the future, and also linked the very emotional atmosphere of that time into my writing.

3. How do you approach long-form works as opposed to short-form?

As both a writer and a reader I prefer longer works. I really like having the time to get into a novel, get to know the characters, have little quirks and subplots and misdirections. When I write a novel it tends to be very organic: to start I usually have one or two scenes or at least phrases and set ups that feel clear to me, as well as an idea or two that I want to explore, a what if, or an emotional charge that I want to reach. And then I get to know the characters and let them play it out in that direction. With short stories I have to have a very defined, discrete idea and story to get across almost from the beginning. It’s nice when it happens, but more often I like to explore.

4. Can you recall the first thing you ever read that made you want to write?

Not really, because as far as I can remember I always wanted to write. I mean, I can remember as a tiny child coming up with non-fiction book pitches about a how-to manual for baths! To me reading was and is a huge part of life, and so writing seemed (and seems) like an utterly natural way to respond and engage. 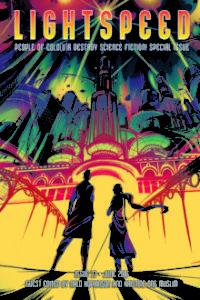 5. What was the spark behind your essay âThirsty for Newâ in Lightspeedâs People of Colo(u)r Destroy Science Fiction? Â

Representation is incredibly important, but a lot has beenÂ written about that and I felt like other authors have it well covered. When I think about diversity in fiction, I don’t always think about wanting to see myself. I think about wanting to see others that I don’t know much about, and learn about their worlds (As I say in the essay, that’s driven a lot of my career choices as well.). The biggest turn-off for me in a book is knowing what happens ahead ofÂ timeÂ because I have read the story or the character a million times before. Obviously this is relative; I can enjoy some relatively formulaic stories as long as the characters or the writing or the setting give me something new to think about. Also, my saturation point for a certain kind of story may be different from yours. More variety – diversity of all kinds – gives us more to learn about and enjoy and stretch ourselves. (Tangentially related: this is actually the point of the commonly misunderstood Darwin doctrine of survival of the fittest. It’s not about being the strongest, it’s about finding a niche, thereby at the macro level diversifying). To get diverse stories, we need diverse people writing them.

6. Is there a follow-up to Infomocracy in the works?

Yes! Null States, the sequel, is in edits now and will be out in 2017. It’s exciting because it let me explore some other elements of the Infomocracy world, including some new locations. Thematically, it is something of a flip: while Infomocracy is about the way information determines our choices and becomes power, NullÂ States is in many ways about theÂ limits of information and the places where it fails.

Aaliya Saleh (An Unnecessary Woman by Rabih Alameddine); Jimmy Paz (Tropic of Night etc by Michael Gruber); Keita Mori (The Watchmaker of Filigree Street, by Natasha Pulley); Agnes DeWitt (The Last Report on the Miracles at Little No Horse by Louise Erdrich); Lauren Olamina (Parable of the Sower, etc by Octavia Butler)

9. Which book, either fictional or otherwise, would you say taught you the most about writing?Â

I always struggle with this question, because I’ve had such a wide range of influences and I feel like that range in itself has been really important to me. I read a lot of different genres, styles, time periods, and I try to write widely as well. If I had to pick one book that influenced Infomocracy specifically though, it would have to be Snow Crash.

10. Whatâs next for Malka Older?

As noted above,Â Null StatesÂ will be out next year, which is very exciting because it gives me a chance to explore this strange world order beyond the intensity of a global election. I also have a numberÂ of stories and poems out or forthcoming – in particular check out my poems in Sundog Lit, my short story “The Rupture” in the (free) archives of Capricious, the short story “The E-Mail Heiress” in Reservoir Lit, and a new poem out in Inkscrawl late summer/early fall.