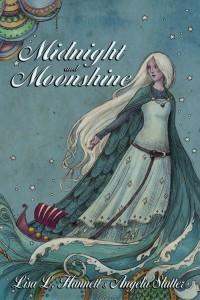 You know what? Four and a bit years ago, Lisa L. Hannett and I wrote this book, Midnight and Moonshine. We’re very proud of it.

Publishers Weekly gave it a star and said this: “Marked by imagery both beautiful and grotesque, and unnerving twists that recall the uncanny horror of original fairy tales, this collection contains a unifying, multilayered plot that draws upon Norse mythology to take the reader on a thrilling, unsettling journey.”