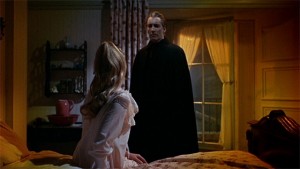 I spent yesterday being unwell and so curled up for some quality time on the couch. I watched three of the Hammer Horror Dracula movies, which seemed appropriate given Christopher Leeâs recent demise, and his place in my heart as Best Dracula Ever. Apart from anything else, I just love these movies even if the blood does look like strawberry jam. I mainlined Horror of Dracula, Dracula Prince of Darkness and Dracula Has Risen from the Grave, and it was this third one that proved most interesting.

The opening scenes – a body in a church bell, hickey from hell on her neck – threw me back in time.

Iâm ten or eleven and my familyâs visiting friends for dinner. After the meal, the adults are still talking at the table and we kids drift away, into the lounge room. Itâs after 8.30 and we turn the television on (after asking permission) and there they are: the bloody trails like spilled strawberry jam, the corpse swinging down from the inside of the church bell – and Iâm hooked. Iâm in love, but Iâm also fearful and not just because thatâs the point of a Hammer film. Although my reading matter was never, ever censored, television was fairly stringently monitored, so I knew this was a movie I wouldnât be allowed to watch.

So, Iâm viewing this Highly Inappropriate Film, drinking in the lush scenery, the beautiful leads, the amazing presence that is Christopher Lee, the glorious costumes, the settings, the campy acting, the pulpy story, the over-the-top musical score designed to scare as much through volume as anything else, and, of course, the strawberry jam blood. Iâm watching it in fascination and apprehension, terrified that it will be taken away from me – that my parents will see whatâs on the telly! That was probably a more intense fear than my first sight of the Undead, and Iâve no doubt that the threat of loss added, over the years, to my memories of the frights accompanying the movie.

Now, keep in mind that my childhood occurred roughly when dinosaurs walked the earth, 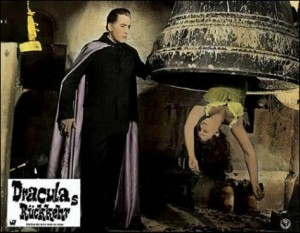 so it was a very different time as far as television was concerned: repeats were few and far between, there was no iView, no video recorders, no Foxtel, no Netflix – it was an era even before video stores had been invented. So, if you missed a movie you probably werenât going to see it again for a long, long while.

Of course, what happened was that it was time to go before the end of the film. I remember dragging my feet as we went out to the car, bitterly resentful at the deprivation – the theft! – and filled with the utter certainty that I would never, ever find out the ending. How could I imagine that over three decades later Iâd be slumped on a couch, beneath a doona, feeling sorry for myself … how could I imagine myself being so very bloody old?

But what yesterdayâs viewing showed me was this: the images that made such a powerful impression on me have stayed with me. Truth be told, I clung to them, did my level best to keep them clear and unsullied, to keep the sensations theyâd brought intact also. Of course, over the years, memories change and fade, gaps erupt and other similar recollections or things weâve made up fill in the holes. But the images I kept from this film were so strong that they feel, when I examine them now, as if theyâd embedded themselves in my bones. As I sat watching, over thirty years later, a thunderous echo of that original dread anticipation that the ending of the movie would be snatched away from me was perched in my chest (I was half-looking over my shoulder, certain my mum would turn up, shaking her finger at me!). I experienced the same thrill, the same frisson, as I had as a child, when I first fell in love with horror and Hammer. 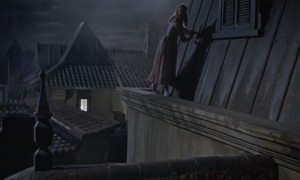 And there’s something more: when the female lead walked across the roofs to go to visit her beloved, I realised just how deeply this film is in my subconscious: Iâve used roof-walking scenes in two of my own stories – âThe Story of Inkâ and âSpells for Coming Forth by Daylightâ – albeit there are no vampires in those tales and my characters are fleeing, not heading towards romantic assignations. We all write conscious tributes to or riffs on something we’ve loved as readers or viewers, but the resurgence of the unconsciously embedded in this way is fascinating.

Iâve always known that a lot of my writing is founded in the fairy and folk tales I was read as a child, in the mythology and history that I later read for myself, but Iâd not realised that something like this wonderful old Hammer gorefest was also responsible in its own way for the genre I chose to write. Watching this film – all the way to the end at long last! – and experiencing once again all those sensations of wonder and dread delight, has been like falling in love all over again, making me remember why I write what I write.

This entry was posted in News and tagged dracula, Dracula Had Risen From the Grave, Dracula Prince of Darkness, Hammer Horror, Horror of Dracula. Bookmark the permalink.