Over at the Book Smugglers: New Weyrd 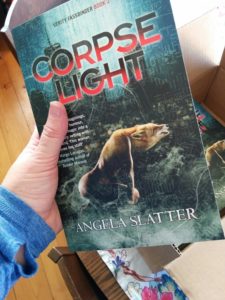 Over at the lovely House of the Book Smugglers, I talk about the New Weyrd:my updated mythology for Corpselight and Verity Fassbinder.

We are delighted to welcome Angela Slatter here today to celebrate the release of a new Verity Fassbinder novel â Corpselight, the sequel to Vigil â by talking about the new monsters in it. Â

So a new Verity Fassbinder novel â that would be Corpselight â required some new monsters. As is my wont, I like to dip back into the depths of mythology and folklore to find my inspiration before adding a bit of a Fassbinder twist to my creatures. I give you my Five New Fassbinder Monsters.

The Undine:
Undines are elementals associated with water. They are generally found lazing around in waterfalls and forest pools, and are cousins to nereids and mermaids et al. They donât have souls, poor things, but can acquire one if they marry a mortal. Hereâs the thing: the man who marries an undine? He needs to be sure he can remain faithful. If he strays, heâs kaput â and why not?

In Corpselight I wanted a water creature, but not a mermaid â there are always mermaids, we know what theyâre like â so I went for the undine. They seemed a bit more relaxed and I really liked the idea of them as the slackers of the watery folk. Specifically, I say theyâre the Yogi Bears of the Weyrd world, given to stealing picnic baskets and lazing on rocks in the Brisbane River. The one Verity talks to has a taste for donuts and is a source of some interesting information that leads V to a surprising series of discoveries about her own family â¦