In between a million other things, I’m trying to make sure I keep writing my own things … they make me feel happy, grounded when the world is a bit topsy-turvy (like now, end of year, moving house, deadlines, etc). So here is my current scribble, untitled (but let’s call it “Nest” for the moment), but I think it might be the Welsh ghost story I’ve been wanting to write for some time … Plus a bit of Kathleen Jennings art as eye candy … 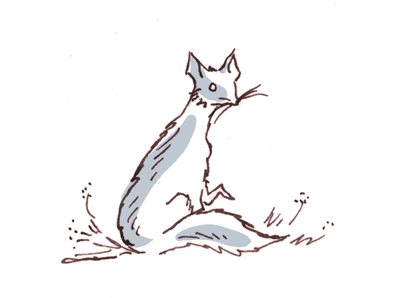 White fox by Kathleen Jennings (not a puppy)

Nestâs father used to tell her that her mother had been stolen away by the fairies. That Aderyn had gone looking for mushrooms either too early one morning or too late one afternoon. Owain wasnât entirely clear, only certain that his wife been taken through either daylight or twilight gate.

By the time Nest had grown old enough to question him about it Owain himself was gone; not physically, but mentally. He wandered in his thoughts, so that he didnât spend many hours in the cottage nestled into the crook of the hill. Heâd tell his daughter he was roaming even while she could see him in front of her, firmly settled in the worn old armchair, a cast-off from somewhere. Owain would have slept there, too, if Nest hadnât stubbornly sent him to his bed every night, no matter how exhausted she was herself. He forgot to feed himself much of the time, but would obediently open his mouth if Nest or Mrs Collins the neighbour sat before him with spoon and bowl. And some days he did leave the house, some days he slipped out the door ? before his daughter began to stay home and take in spinning so she could keep a watchful eye on him ? and wander the valleys and peaks. Once, Owain disappeared for two entire days; Nest all but lost hope of finding him again, but she couldnât deny that spark of relief at the idea of being freed of her watch. But Daffyd Morgan found him, didnât he, and brought him home again; Owain strangely silent about where heâd been for once.

Any road, Aderyn was gone before Nest had anything more than cloudy memories of a narrow pretty face, dark eyes, blacker than black hair, and a red birthmark running up the side of her throat.