Some Perspective for Awards Season 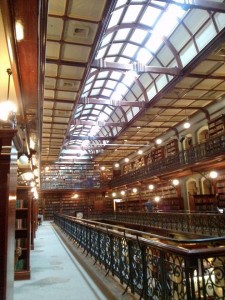 Look at all of the books, so many many books.

Just a little note for some perspective during awards season.

While Iâm utterly delighted and very humbled to be nominated for this yearâs Aurealis Awards, Iâm also very aware that itâs a bit of a crap shoot. One year you may have produced work that you consider to be your best, yet judges donât agree and you donât make any lists. Other years you may think the fuss is a bit much because you donât think you turned out anything super-duper; but youâre on lists.

My point? The shortlists and the awards, while they are very nice, are not the be-all-and-end-all of your career.

Thereâs a lot of amazing work that hasnât made the shortlists, not due to any shortcomings, but purely due to individual tastes on the judging panels (who, let us remember, do their best and do not get paid for the time and effort they put in). Awards are not something you can control, theyâre also not anything anyone âdeservesâ or has a right to. Sure, everyone gets a bit miffed and butt-hurt to feel ignored, but being on or off doesnât change anything about you as a writer. It doesnât make you better or worse if you win or lose; it doesnât make your readers love your more or less whether youâre shortlisted or not. It doesn’t mean your book is an ugly baby coz it’s not on a list.

âEasy for her to sayâ some will sniff, but this is something Iâve said for years (here and here). Iâve been on lists and Iâve been off them; Iâve won awards and Iâve lost them. Itâs lovely to feel appreciated, but a shortlisting or an award doesnât make me write more, or better, and it doesnât make me stop writing any more than bad reviews or someone elseâs public shouting of spite about me.

You donât write for the awards: you write because you canât do anything else. You write for one person, first and foremost: yourself. Sometimes, if youâre lucky, an audience chooses to come along for the ride. Who you are as a writer doesnât change whether youâre awarded/shortlisted or not. The awards are the jam; some days you get it, some days you donât.

So be gracious, always. Be sane, as much as you can. Be hopeful, but not expectant. Keep your foul moods and snide remarks for the privacy of your own home.Â  Most of all, keep writing for no one but yourself.

This entry was posted in News and tagged angela slatter, aurealis awards, perspective on awards. Bookmark the permalink.

3 Responses to Some Perspective for Awards Season