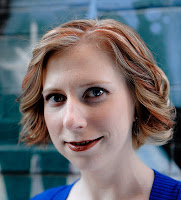 Helen Marshall is the author of the British Fantasy award-winning Hair Side, Flesh Side (which is indeed brilliant),Â Gifts for the One Who Comes After and The Sex Lives of Monsters, as well as many short stories scattered lovingly across the planet (possibly the Universe, who knows?). She’s also an editor, poet, and academic. Her Spectral Book of Horror Stories contribution is “Funeral Rights”.

Most of the first horror stories I read sort of snuck in by means of Neil Gaimanâs Sandman. I didnât read horror growing up because I found it too effective at scaring the bejesus out of me (whatever a bejesus happens to be, by the age of ten, I doubt I had very much left). The two storylines I remember most vividly are the CEREAL Convention in âThe Dollâs Houseâ and, of course, â24 Hours Dinerâ. I donât know if I liked reading those stories. It seems to me that there are some kids who discover horror, and something about it clicks for them: they love the stuff! That wasnât me. I liked lighter fare. But over time I found it was the darker stuff that stuck in my mind, that I would turn over and over and over as I tried to understand it precisely because it made me uncomfortable. My tastes have changed. I read horror stories much more regularly because I find something in those stories that fascinates me and discomfits me, that keeps me going.

In January I moved from Toronto where I had just finished a PhD in medieval literature to Oxford to start up a two-year postdoc. Oxford is a strange placeâone of those rare places that seems to live up to its reputation: the dreaming spires and the sandstone colleges, professors of every ilk wandering the street, students in fluttering academic gowns riding past on bicycles, and, of course, one of the best collections of medieval English manuscripts in the world. The story itself originally came out of an encounter I had when I was trying to find a flat. Because I didnât live in England and the Oxford housing market is a bit nuts, I was trying to book temporary accommodations, and I ended up visiting with a wonderful lady who had a place on Observatory Street that she would rent out to visiting scholars. It was, bizarrely, called The Dollâs House (see above, and run). I ended up finding something a bit more long-term but the place stuck in my mind. Later on, once I was here, two stories were told to me by other academics, which I donât feel comfortable sharing so nakedly in print, but suffice it to say that these provided the inspiration for several of the elements of the story.

My stories wander from genre to genre, and so Iâm not even sure I could say what a typical Helen Marshall story is. This story was heavily influenced by Roald Dahl and Robert Aickman, both of whom I was reading at the time, and so I think itâs possibly closer to a traditional horror story than I typically write.

I suppose Iâm more of a psychological horror fan, but that doesnât describe my interests fully. I liked weird fiction, fiction that breaks expectations and plays around with different kinds of resonance and dissonance. I find horror literature in general is much more invested in dissonance and strangeness, and thatâs what really attracts me to the genre.

5. What are you currently reading?Â Â

Iâm currently reading my way through the fiction of Michael Ondaatje. I read his poetry collection âThe Collected Works of Billy the Kidâ and it was a major influence on my writing for many years. Recently, he gave a talk in Oxford, and I found his responses so charming and witty, his reading so compelling, that I wanted to return to his writings and see what I had missed. But alongside that Iâve been jumping back and forth between the short stories of Julio Cortazar, Robert Aickman, Angela Carter and Shirley Jackson. I have one shelf on my very tiny bookcase which is filled with books small enough that I can easily carry them around London, and most of those fit the bill. Itâs been an excellent opportunity to catch up on some of the classic writers of the genre.