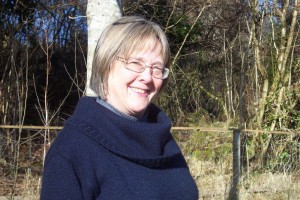 Of Lisa Tuttle’s work, Dave Langford has said âTuttle writes well and knows just how to push the gooseflesh button. Iâd say more but itâs difficult to type while trembling under the bedclothes.â Speaks for itself, really. Below, Lisa talks about her story “Something Sinister in Sunlight” from The Spectral Book of Horror Stories, and her horror influences.

Not just one, but several (at least), because my first encounter with horror fiction was through big, fat anthologies owned by my father; I think he must have bought or been given them when he was in his teens. I don’t have them (alas!) and can’t remember the exact titles, but they were things like “The Haunted Omnibus” and “Great Tales of Mystery and the Supernatural”Â  — and as soon as I’d learned to read, anything with words like “ghost” or “mystery” or “haunted” attracted me. None of them were written for children, and the really long, or more old-fashioned stories,Â  were too daunting, so I went for the shortest stories first. I read a lot by Saki, Bierce and O. Henry.Â  The stories that stand out most in my mind as the scariest and most memorable — I have no idea how old I was when I read them, but I was certainlyÂ no older than tenÂ — are “The Monkey’s Paw”Â  by W.W. Jacobs, “A Visitor from Down Under” by L.P. Hartley,Â “The Mezzotint” by M.R. James, and “The Yellow Wallpaper” by Charlotte Perkins Gilman.Â  Still scary, after all these years!

The notion of “character entrapment” has fascinated me for years — the idea that (very rarely) an actor becomes so identified with a particular role, or perhaps so obsessed with it, that it has an impact on his private life.Â  Probably the most famous instances are with actors who have played Sherlock Holmes — although I don’t know the details, I’ve heard that both Basil Rathbone and Jeremy Brett were affected by it.

It’s probably “typical Lisa Tuttle” — although, now that I think about it, maybe not, since the main character is male rather than female.Â  I think my stories are often ambiguous; they can be read on more than one level, and it is often unclear whether something has a supernatural or moreÂ psychological explanation.

Totally on the subtle & psychological side. They don’t call me Subtle Tuttle for nothing! (Actually, nobody calls me that.Â  But somebody might.)

Just finished FUTURE PERFECT by Chris Evans and Roy Kettle — great fun; it combines a mystery-thriller plot with science fiction subculture, fannishness, cult religion, and forgotten SF writers.Â Â I’ve just started a crime novel, THE SUMMER OF DEAD TOYSÂ  byÂ Antonio Hill (translatedÂ by Laura McGloughlin), and (because I can never read just one book at a time) am about halfway through WALT WHITMAN’s AMERICA:Â  A Cultural Biography by David S. Reynolds, and in-between I’ve been dipping into the collected works of Saki (recently downloaded onto my Kindle)Â — and what a fantastic writer! I had either forgotten or was too young when I first read him toÂ realize how funny he could be.Â  Next up, probably THE ACCURSED by Joyce Carol Oates, which I’m very keen to read.Â  I hope that’s not Too Much Information….I could talk about books all day….

This entry was posted in News, Pimping/Promoting! and tagged "A Visitor from Down Under" by L.P. Hartley, "The Mezzotint" by M.R. James, "The Monkey's Paw" by W.W. Jacobs, Amrose Bierce, and "The Yellow Wallpaper" by Charlotte Perkins Gilman, Basil Rathbone and Jeremy Brett, FUTURE PERFECT by Chris Evans and Roy Kettle, george r r martin, lisa tuttle, Saki, THE ACCURSED by Joyce Carol Oates, The Haunted Omnibus" and "Great Tales of Mystery and the Supernatural", The Spectral Book of Horror Stories, THE SUMMER OF DEAD TOYS, WALT WHITMAN's AMERICA: A Cultural Biography. Bookmark the permalink.