Spectral Book of Horror Stories: Nicholas Royle’s This Video Does Not Exist 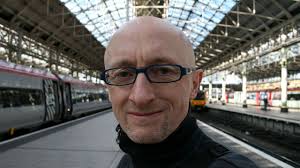 The multi-talented Mr Nicholas Royle is not only a writer, but also a senior lecturer in creative writing at the Manchester Writing School, and runs the acclaimed Nightjar Press. He’s edited sixteen anthologies and is the author of seven novels, two novellas, and one collection. He took some time out to answer questions about his Spectral Book of Horror Stories contribution.

1. Can you remember the first horror story you read that made an impact on you?
One of the first was ‘A Real Need’ by William Sansom in one of the early Pan Books of Horror Stories, volume 6 or 7, I think. It was short and clever and got inside my skin. The first time I really scared myself reading was with Lovecraft’s ‘The Hound’, which I read late one night, at quite a young age, sitting up late after my family had gone to bed.

2. What inspired the story you wrote for this anthology?
I have a horrible fascination for decapitation. I remember a brief item in the newspaper headed ‘Man facing house move cuts off own head’. I’ve never been tempted to do that, but I have often lost my head and occasionally even my mind. Some of the research for this story was profoundly disturbing and I wished I hadn’t gone there.

3. How would you describe the kinds of stories you usual write and does this Spectral Book of Horror story depart from that?
I usually write from a very autobiographical starting point and at some point the fictional narrative diverges from my own. The question is at what point does it diverge? It’s not always clear, even to me. This story, my most recently completed story, is a good representation of where I’m at with regard to short stories. Also, I think it has legs. I don’t think I’m finished with it.

4. In your heart of hearts do you prefer your horror to be of the slashy variety or of a more subtle psychological stripe?
I have no interest whatsoever in stuff that’s primarily about grossing the reader out. I’m attracted to mystery and ambiguity, to the uncanny, to good, intelligent writing.

I am reading a French novel (in English), The Investigation, by Philippe Claudel, and when I’ve finished that I’ll move on to Lee Rourke’s new novel, Vulgar Things. I also really want to read Will Wiles’s second novel, The Way Inn. I bought it in hardback as a present for someone and would love to have a sneak read of it, but I fear it would be impossible without it being evident to its eventual recipient. Any day now I will be inundated by hundreds of stories entered into the Manchester Fiction Prize, for which I am a judge.