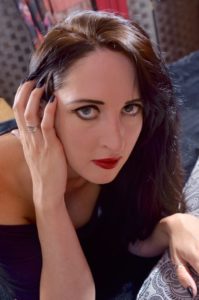 Karen Runge is an author and visual artist based in Johannesburg, South Africa. Her works have appeared in various anthologies and other publications around the world. Her first solo short story collection, ‘Seven Sins’ was published by Concord Free Press in 2016, and her first novel ‘Seeing Double’ made its debut in 2017, from Grey Matter Press. Never shy of darker themes in horror fiction, she has been dubbed ‘The Queen of Extreme’ and ‘Princess of Pain’ by various bloggers and book reviewers. The late Jack Ketchum once said in response to one of her stories: ‘Karen, you scare me.’

1. What was the inspiration for your SiD2 story, ‘Angeline’?

The song âAngeleneâ by PJ Harvey. I even used the name, just with slightly altered spelling. I love PJ Harveyâs music. Apart from her gorgeous sound, her lyrics are so poetic and powerful, often with something dark or sinister seething just out of sight. The lyrics to that song in particular had me gripped for a good while before I realised this fascination was my own subconscious telling me to write something around them. I bade the call, and so âAngelineâ was born.

I always loved horror and always wanted to be a writer. When I hit my teens I was ripping through books like a rabid wolf, and realised that there is a lot of horror in what people describe as more âliteraryâ works. Those are the ones that really set me on the path to forming my own style. John Fowlesâ âThe Collectorâ, Margaret Atwoodâs âA Handmaidâs Taleâ, Joyce Carol Oatesâ âMan Crazyâ each in their own way had a huge impact on me. Then thereâs the obligatory Stephen King (in my case it was âCarrie’âjust wow), and Clive Barkerâs âBooks of Bloodâ. I think all this rounded me out as a writer who goes for detailed prose and deep character development, with a strong draw for digging into the disturbing and the unspeakable. This would also explain why my own stories seldom have supernatural elementsâIâm all about the psych.

So Iâll surprise the hell out of everyone here and say my pick is âThe Coral Islandâ by R.M. Ballantyne. First, itâs a great read with likable characters and a fantastically fun âjourneyâ type of plot. Second, the horror elements in it (which blindside the reader about a third of the way through) are some of the most extreme Iâve ever read. To give you an idea, to this day I donât eat porkâIâm actually phobic about the very idea of eating porkâand 50% of the blame for that lies at this bookâs feet. (The other 50% belongs to âNightmare on Elm Street 5: The Dream Childâ. I read this book and watched this movie at around the same time. That âtimeâ being when I was still way too young for either of them. And yes, itâs quite evident that Iâm still scarred!) The other benefit to taking this book with me is that itâs full of groovy little tips on how to survive an island marooning type situation. Iâd say that makes it the best pick all round.

Itâs probably easier for me to talk about tropes I donât like than tropes that I do. Iâm all the way zombieâd out, for example. I really wish weâd let those undead dudes rest for a little while, please. Theyâve damn well earned it. Iâm a big believer that any trope (so long as it isn’t tired as all hell, as in the case of zombies) can work if itâs handled from a fresh perspective. Stephen Graham Jonesâ âThe Last Final Girlâ was a hilarious and very well written dig at the whole Final Girl thing, for example. It was so all the way in the readerâs face, and owning it, that it couldnât be anything but a fresh take. There isnât much out there that canât be done well, because as is true in most things, itâs not WHAT youâre doing so much as it is HOW youâre doing it.

Iâm currently involved in a very big and very exciting project which I very unfortunately cannot talk about just yet! Itâll be a great day when I finally get to make that announcement. In the meantime Iâm busting my behind on a few new shorts, and I also have a novel currently sulking in the corner. Each of these are at varying stages of development, but Iâm currently in a great space as an artist and am really enjoying everything Iâm doing.

Suspended in Dusk II is out from Grey Matter Press and edited by Simon Dewar.