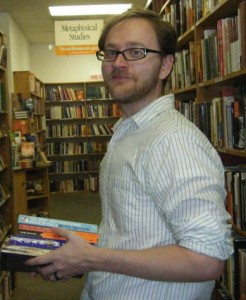 Kurt Fawver is a writer of horror, dark fantasy, and weird fiction. He’s published fiction in numerous magazines and anthologies, and has forthcoming stories in the Lovecraft eZine, Xnoybis, and Midian Unmade (Tor, 2015). Kurt has released one collection of short stories, Forever, in Pieces (Villipede Publications, 2013), and is working feverishly to compile a second. Besides fiction, Kurt also writes scholarly articles and nonfiction essays, many of which have been published in various journals and scholarly tomes, including the Journal of the Fantastic in the Arts and the Irish Journal of Gothic and Horror Studies. Kurt holds a Ph.D. in literature and teaches at a large state university where, every semester, he tries to impart to his students the necessity of horror. You can find Kurt online at kdfawver.blogspot.com or facebook.com/kfawver.

What inspired your story “Marrowvale”?

The primary inspiration for my story was my hometown, which, like the eponymous “Marrowvale”, is an unassuming, slowly eroding backwater village nestled in central Pennsylvania. The people there are largely xenophobic and highly protective of their customs and culture — a culture that, above all else, revels in tromping about the wilderness (whether to hunt game, go camping, ride all-terrain vehicles, or hold bonfire parties). Growing up, I always suspected that the people of my hometown were belligerent to outsiders because they were hiding a deep, dark secret which would, of course, manifest itself in the wilderness and be latently (if not openly) hostile toward anything from the “outside” world.

Shirley Jackson’s “The Lottery.” I first read it in 8th or 9th grade. It’s the first story I can remember reading where the terrible things that happened within its pages had no logical cause, no good reason for occurring. There was no locus of the “evil” in the story other than antiquated and ill-defined tradition — banality at its finest. Add to that the story’s concluding ambiguity and sense that this tradition might continue indefinitely, and the tale became the first to leave me with a distinct and prescient feeling of horror, a sense that the world (maybe the universe) was ultimately not a place of rationality and order, but a sphere of chaos seething with violence and indifference.

It’s cliched to say, but my choice would vary from day to day. That said, three who consistently earn the distinction are William Hope Hodgson, H.P. Lovecraft, and Shirley Jackson. (But Clive Barker, Algernon Blackwood, and Thomas Ligotti often bump up into the top three as well.)

My writing is almost unequivocally dark, but it’s not always relegated to the boxes we normally check to see if something is “horror” or not. Sometimes I write stories that might be better classified as “weird fiction” and sometimes I write stories that would fall firmly in the “dark fantasy” section of the bookstore. I’ve tried my hand at incorporating SF elements into my fiction on several occasions and I even have a handful of tales that are probably closer to what we might call magical realism. I suppose what I’m saying in a roundabout way is that while I might be most proficient with horror I’ll use whatever tool from the speculative fiction shed is necessary when I see a job it can perform or a particular narrative it can best construct.

At times, given the size of the stack, it seems like the whole of English literature must be in there. At the moment, titles near the top include Ray Cluley’s Probably Monsters, Molly Tanzer’s Vermilion, D.P. Watt’s The Phantasmagorical Imperative, Matthew Bartlett’s Gateways to Abomination, Terrence Holt’s In the Valley of the Kings, and Sarah Lotz’s Day Four.