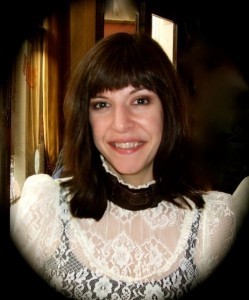 Thana Niveau is a Halloween bride who lives in a crumbling gothic tower in Wicker Man country. She shares her life with fellow horror scribe John Llewellyn Probert, in a Victorian library filled with arcane books and curiosities. She has twice been nominated for the British Fantasy award, for her collection From Hell to Eternity and for her short story âDeath Walks En Pointeâ.

What inspired your story “Behind the Wall”?

The origin of this story is bittersweet. Shortly after my friend Joel Lane died, I had a strange dream. My husband John and I had bought a new house in an isolated village and someone told us we could keep Joel alive by walling off a room in the house and imagining that he was there behind it, still writing. In the dream the idea was both creepy and comforting and we were about to start work on it when I woke up.

It wasnât at all my usual kind of dream (mine tend to be both more surreal and overtly threatening) and I had the strangest notion that it was a gift from Joel. I donât believe in god or heaven but I do believe that we have souls, an essence that is uniquely âusâ. That essence has to go somewhere when we die. Perhaps it simply gets re-absorbed into the universe. Or perhaps it gets dispersed among your loved ones. If so, I hope everyone who loved Joel has a part of him with them always.

That would have to be Poeâs âThe Tell-Tale Heartâ, which my mom first read to me when I was very little. I loved it and made her read it to me again and again. It made me want to be a writer. Some 20 years later, I read Clive Barkerâs âDreadâ and felt insanely jealous that heâd got there first with the idea!

Iâve recently fallen back in love with SF, so Iâve been both reading and writing a lot of that lately. I was thrilled to place my story âThe Calling of Nightâs Oceanâ in Interzone last year.

Iâve also done some fun Lovecraft crossovers, including a story called âTentacular Spectacularâ for Steampunk Cthulhu and a high fantasy one for Sword & Mythos. I had a blast writing them and theyâre both genres Iâd happily return to, with or without tentacles!

I also read crime fiction, but I donât think Iâd enjoy writing it. I would love to attempt an old-school mystery, though – ideally set in space! And Iâve got one pet project thatâs been fermenting for decades which is either fantasy or magic realism, although of course I canât keep the horror out of it.

I tend to have several books on the go at once and Iâm buried in 4 novels right now: Creatures of Light and Darkness (Roger Zelazny), Ringworld (Larry Niven), Neuromancer (William Gibson) and Hellstromâs Hive (Frank Herbert), as well as the current issues of Interzone and Black Static and a couple of horror anthologies. (I tend to dip in and out of story collections and anthologies rather than reading them straight through.) On my teetering TBR pile is a ton of mostly SF, including Armada (Ernest Cline), Mother of Eden (Chris Beckett) and Helliconia Summer (Brian Aldiss).